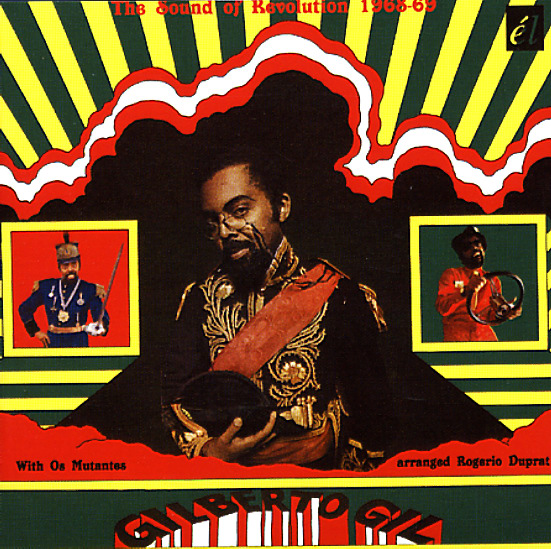 2 late 60s classics from Gilberto Gil – the bulk of his Tropicalia recordings on a single CD! First up is his self-titled album from 1968, a bold leap forward for Gil – his first album recorded during the Tropicalia years, and an amazing collaboration with arranger Rogerio Duprat! The album's got a sound that really bridges scenes in Brazil – elements of older folkloric musics, folded with samba rhythms, folded again with psychedelic touches from Os Mutantes – who also help out on the set – all wrapped together with a sound so revolutionary, it still crackles with energy all these many years later! The sound and style are impossible to describe accurately, which is part of the charm of the record – and it's key placement as one of the prime musical texts of the Tropicalia years. Titles include "Marginalia II", "Luzia Luluza", "Pega A Voga, Cabeludo", "Frevo Rasgado", "Domingou", and "Domingo No Parque". Next is the rare 3rd album by Gilberto Gil, and a key piece of the Tropicalia puzzle – one of the most wildly experimental albums from those years, and Gil's last before going into exile! The sound is much more electric than his other albums from the late 60's – and the production, songwriting, and instrumentation get very crazy at times – but never too crazy to cover up Gilberto's excellent singing, which is still as filled with feeling as ever. Arrangements are by the mighty Rogerio Duprat, who does as great a job here of balancing Gil's sensitivities as he does on Gal Costa's sublime efforts from 1969 – and the instrumentation is a weird and wonderful mix of Bahian rhythms, fuzzy guitar, and crazy electronics – all heartfelt one minute, freaked out the next. Tracks include "Cerebro Eletronico", "Volks Volkswagen Blue", "Futurivel", and "2001", which was written by Tom Ze and Rita Lee – plus the wild cut "Objecto Semi-Identificado", which is sort of a John Cage-esque track of found radio and electronics, with vocals by Gil!  © 1996-2022, Dusty Groove, Inc.

Quarteto Em Cy Interpreta – Gonzaguinha, Caetano, Ivan, Milton
Philips/Universal (Japan), 1980. New Copy
CD...$9.99
A really wonderful album from Quarteto Em Cy – the Brazilian vocal quartet who first rose to prominence during the bossa nova years, but soon moved into even more sophisticated material during the 70s! The approach of this set is telegraphed in the title – as the group take on songs ... CD

A Capela Do Brasil
Philips/Universal (Japan), 1992. New Copy
CD...$7.99
The first French album recorded by this legendary Brazilian trio – but one that also features plenty of guests from their homeland – including Djavan, Caetano Veloso, Gilberto Gil, Ivan Lins, Joao Bosco, and Milton Nascimento! The group sing in a mode that's every bit as acapella as ... CD