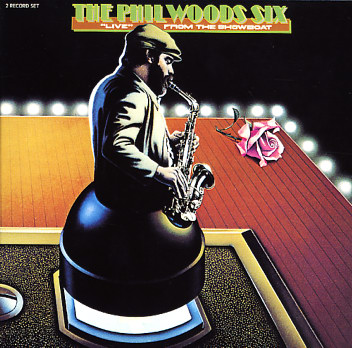 Live From The Showboat

A double-length, ultra-cool set from saxophonist Phil Woods – yet another aspect of his great body of work from the 70s, and a live date that features Woods at the head of a sextet! The group here features acoustic piano, electric guitar, bass, drums, and percussion – all used in ways that are often a bit more organically building and spacious than some of Phil's more intense Rhythm Machine albums – showing a new sensitivity in Woods' music, but one that still has plenty of room for searing, searching solo moments! Titles include "Django's Castle", "A Little Peace", "Brazilian Affair", "I'm Late", "Superwoman", "High Clouds", "How's Your Mama", and "Rain Danse".  © 1996-2022, Dusty Groove, Inc.
(Cover has some edge & ring wear.)

Song For Sisyphus (Direct To Disc)
Century, 1978. Near Mint- Gatefold
LP...$3.99
A pretty great little record from Phil Woods – a return to straighter playing after the freer sounds of some of his early 70s European work, done in a mode that has lots of nice boppish touches, and which also shows a more deeply soulful side of Phil's blowing. Titles include "Change ... LP, Vinyl record album

At The Village Vanguard
Antilles, 1982. Near Mint-
LP...$4.99
Phil Woods plays both alto and clarinet – in a quartet with Hal Galper on piano, Bill Goodwin on drums, and Steve Gilmore on bass. LP, Vinyl record album

Early Quintets
Prestige, 1954/1959. Near Mint-
LP...$11.99
Really wonderful work from alto genius Phil Woods – already showing a sense of tone and timing that breaks him away from all the Charlie Parker devotees on the market! The groups are great, and Jimmy Raney adds in some amazing chromatic work on guitar – bringing to Phil the same sort ... LP, Vinyl record album

Rights Of Swing
Candid, 1961. Near Mint-
LP...$9.99
Really compelling large group work from Phil Woods – one of his first-ever efforts of its type, and a tremendous session that's filled with solos from a wide array of very hip players! The whole album's built around a 5-part "Rights Of Swing" work penned by Woods – a jazz ... LP, Vinyl record album

Song For Sisyphus
Gryphon, 1978. Near Mint- Gatefold
LP...$4.99
A pretty great little record from Phil Woods – a return to straighter playing after the freer sounds of some of his early 70s European work, done in a mode that has lots of nice boppish touches, and which also shows a more deeply soulful side of Phil's blowing. Titles include "Change ... LP, Vinyl record album