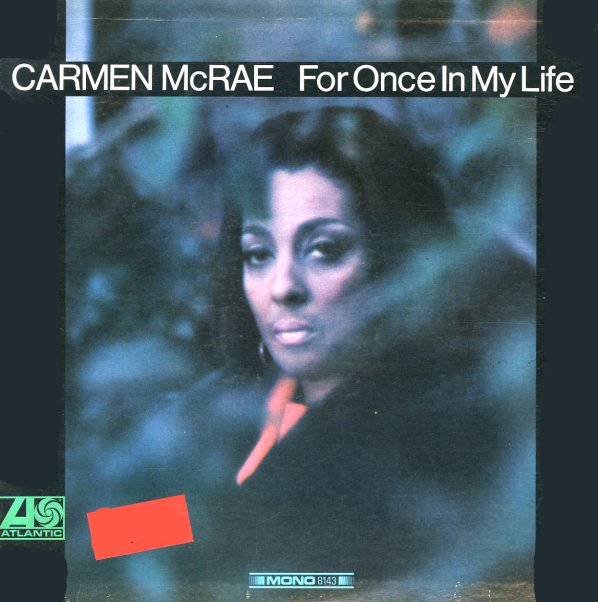 Carmen McRae gets some very groovy backing here from British maestro Johnny Keating – who helps her find a whole new sound through his wonderful arrangements on the set! The overall sound is relatively mellow, but still pretty great – all adult, and filled with unusual instrumental twists that keep things interesting under Carmen's vocals, even when the tunes are familiar. But probably some of the best numbers here are the originals by Keating – "Come Live With Me" and "It's Not Going That Way" – both great lesser-known 60s pop numbers that have a mature sound that we really love, especially on the first one! Other titles include great covers of "I Just Wasn't Made For These Times", "Flying", "Our Song", and "Don't Talk".  © 1996-2022, Dusty Groove, Inc.
(Green and red Rockefeller label pressing with MO suffix. Cover has a cutout notch, in great shape otherwise.)

Fine & Mellow – Live At Birdland West
Concord, 1988. Near Mint-
LP...$2.99 4.99 (CD...$7.99)
A mighty nice setting for Carmen McRae, and a bit different than usual too – especially given that the backing group is a pretty soulful tenor/organ combo! Jack McDuff handles the Hammond, and Red Holloway plays both tenor and alto, with some nice comping from Phil Upchurch on guitar in the ... LP, Vinyl record album

Finest Of Carmen McRae – You'd Be So Easy To Love (aka Carmen McRae)
Bethlehem, 1954. Very Good+
LP...$2.99
Great early work from Carmen McRae – small combo, jazzy, and a nicely different set than some of her other work of the 50s! Backings are by two groups – one headed by accordionist Mat Mathews, the other by saxophonist Tony Scott – both quartets, and both of them working with a ... LP, Vinyl record album

As Time Goes By – Live At The Dug
Catalyst, 1973. Near Mint-
LP...$7.99
A very unusual session for Carmen McRae – a live recording that features only her vocals and piano, on spare readings of a number of sophisticated songs that ably demonstrate the class and care she was bringing to her work at the time! The approach is quite different from some of the ... LP, Vinyl record album