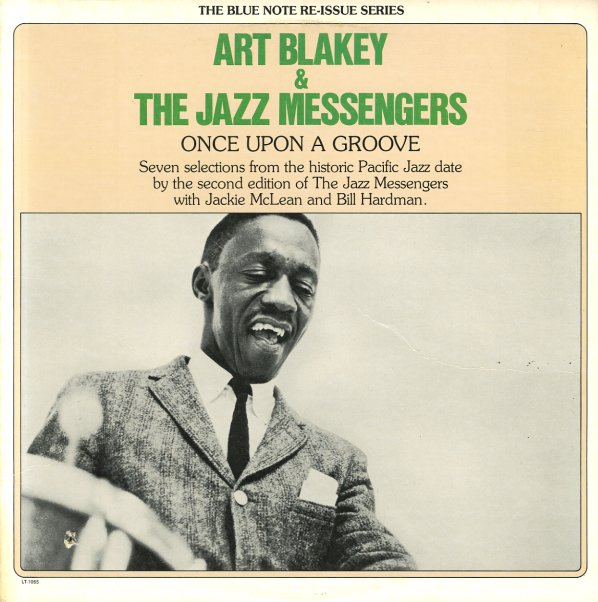 Once Upon A Groove (aka Ritual)

A hard-swinging cooker from Art Blakey and the Jazz Messengers – recorded during the landmark year of 1957 – when Blakey's group was open to recording for a number of different labels, in a number of different settings! The set was originally done for the west coast stalwart Pacific Jazz, but it's got a sound that's much more in the hardbop mode of the New York scene – all the fire and intensity that Blakey first cooked up for Blue Note, cast out with a slight sense of openness here in the less iconic setting. Players include Jackie McLean on alto, Bill Hardman on trumpet, and Sam Dockery on piano – and the album's right up there with Vik/RCA, Savoy, and Chess material they cut at the time. Tracks include "Touche", "Sam's Tune", "Once Upon A Groove", and "Wake Up".  © 1996-2022, Dusty Groove, Inc.
(Cover has a cutout hole and light wear.)

Three Blind Mice (UA pressing)
United Artists, 1962. Very Good-
LP...$39.99
A really unusual live set from the great Art Blakey – his only album for the United Artists label, but one that continues the tradition of the expanded group style he was starting to use at Blue Note! The lineup here is a sextet, one that's got even more power than the Jazz Messengers as a ... LP, Vinyl record album

At The Cafe Bohemia Volume 2
Blue Note, 1956. Very Good+
LP...$39.99
A classic early set featuring the Jazz Messengers back when the group was less of an Art Blakey project, and more of an all-around affair – as you might guess from a lineup that also includes Horace Silver on piano, Kenny Dorham on trumpet, Hank Mobley on tenor, and Doug Watkins on bass! The ... LP, Vinyl record album

Tough
Cadet, 1957. Very Good+
LP...$28.99
An obscure Art Blakey session from that unusual year of 1957 – a time when the Jazz Messengers had a very striking lineup – with Jackie McLean on alto, Bill Hardman on trumpet, and Sam Dockery on piano! The set was recorded in Minneapolis – a further mystery for the date, given ... LP, Vinyl record album

Structurally Sound
Pacific Jazz, Late 60s. Very Good+ Gatefold
LP...$26.99 (CD...$13.99)
One of Booker Ervin's last sessions – quite different than some of his earlier work, and a great indication of the way that he was stretching his style in the years before his untimely death. The group's a committed band of modernists, and includes a young Charles Tolliver on trumpet, plus ... LP, Vinyl record album