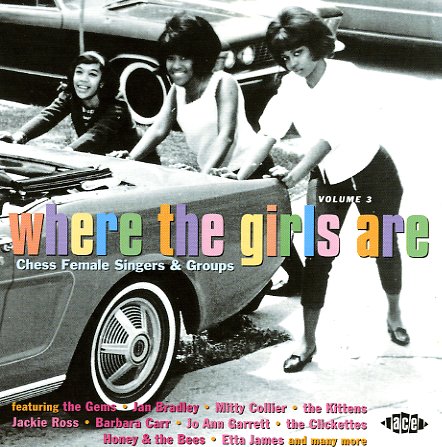 Where The Girls Are Vol 3 – Chess Female Singers & Groups

An excellent selection of rare female soul from the Chess family of labels in Chicago – featuring a huge amount of material that we've never seen on other reissues! You'll recognize a few of the names, but most of the material by them is obscure – and there's a heck of a lot of other great work by lovely singers that we've rarely seen before – a great mix of deep soul, bluesy soul, and some of the especially cool classy soul that Chicago was known for. Titles include "You Gave Me Soul" by Andrea Davis, "How Long" by The Kittens, "I Just Can't Help It" by The Clickettes, "My Baby's Real" by The Starlets, "You Really Know How To Hurt A Girl" by Jackie Ross, "This Time Tomorrow" by Tammy Montgomery, "Just How Much Can One Heart Take" by The Kolettes, "My Mama Told Me" by Barbara Carr, "Your Kind Of Lovin" by Jan Bradley, "He's My Guy" by Margaret & Carol, "I Let Myself Go" by Geraldine Hunt, "Is It A Sin?" by Timiko, "She's Got Everything" by Sugar Pie DeSanto, "Party Across The Hill" by Yvone Baker & The Sensations, and "Pretty Little Words" by Tawney Williams. 26 cuts in all – with loads more great stuff!  © 1996-2022, Dusty Groove, Inc.