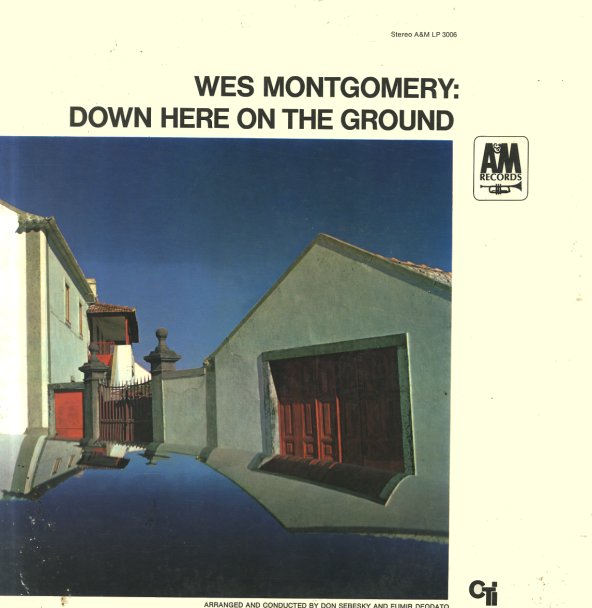 Down Here On The Ground

Super-dope work from the great Wes Montgomery – set to excellent early CTI arrangements from Don Sebesky and Deodato! The groove is nice and airy – with Wes' guitar floating over the top, yet still present enough to ring out loud and clear on all the tightly plucked notes – and the arrangements are never constricting or confining, and instead have a very open vision that really lets Montgomery's sound soar! Herbie Hancock's on piano, and Mike Mainieri adds some nice touches on vibes – and the balance of sounds, tones, and colors is simply sublime. Titles include the amazing title cut "Down Here On The Ground" – the start of a whole new generation in jazz – plus "Wind Song", "The Fox", "Goin On To Detroit", "Up & At It", and "When I Look In Your Eyes".  © 1996-2022, Dusty Groove, Inc.
(Tan label pressing in a matte cover, with light wear, some aging down the opening and a bit of pencil on the back.)

California Dreaming
Verve, 1966. Near Mint- Gatefold
LP...$19.99
A stone classic on Verve! Back in the 60s, Wes Montgomery must have been California Dreaming – because by the time of this LP, he'd come a long way from his Indiana roots – and had used the best part of the hip west coast scene to add a lot to his style – fuller rhythms and ... LP, Vinyl record album

Dancing In Your Head
Horizon/A&M, 1977. Near Mint- Gatefold
LP...$39.99
One of the few standout 70s sessions by Ornette Coleman – a wonderfully rhythmic record that shows Ornette's expanding musical vision at the time! Most of the record is dominated by the guitar-heavy "Theme From A Symphony" – a very harmelodic number that takes up all of side ... LP, Vinyl record album