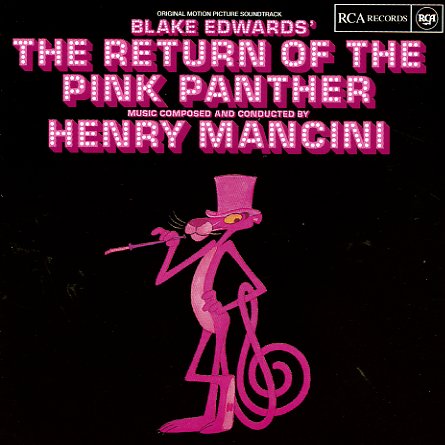 Return Of The Pink Panther

A surprisingly groovy record – and one that's very different from the original Pink Panther soundtrack! This one's got much more of a 70s electric feel – and show's Henry Mancini's growth in this format, along the lines of his Cop Show Themes album, or his excellent Thief Who Came To Dinner soundtrack! There's a lot of Fender Rhodes on the record – especially on the tracks "The Orange Float", "Disco", "Navel Maneuver", and the slyly funky "Here's Looking At You Kid". There's also an excellent remake of the original Pink Panther theme – much better than the original, with a nice jazzy chase quality!  © 1996-2021, Dusty Groove, Inc.
(Cover has splitting on the top seam and spine.)

Peter Gunn
RCA, 1959. Very Good
LP...$5.99
A classic! This is the record that made Mancini's career, and forever transformed the face of crime and jazz. The record's a stunning batch of instrumentals, played by a crack group of west coast players who also performed regularly in the TV show. Titles include the classic "Peter ... LP, Vinyl record album