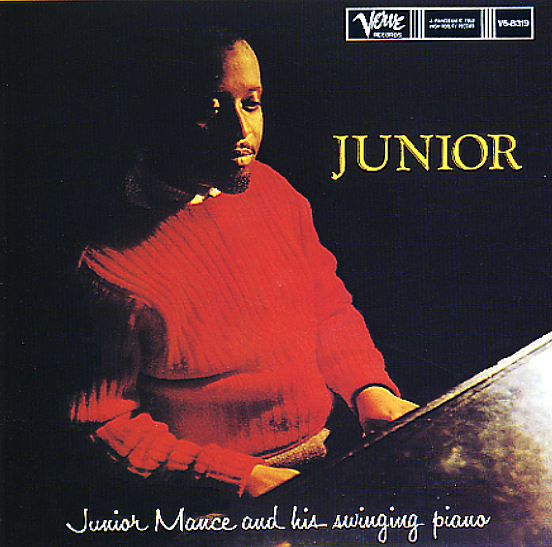 A groovy early album from pianist Junior Mance – one of the first we've ever seen with him as a leader, and a rare date recorded at the end of the 50s for Verve! The style here is a fair bit like some of Junior's work of the early 60s – a definite soul jazz leaning, but also some more lyrical, lighter moments too – tracks that nicely offset the harder left-hand approach used by Mance on the groovers. The group's a trio – with Ray Brown on bass and Lex Humphries on drums – and tracks are short, with titles that include "Jubilation", "A Smooth One", "Miss Jackie's Delight", "Small Fry", "Love For Sale", and "Junior's Tune".  © 1996-2022, Dusty Groove, Inc.
(Japanese pressing, with obi – 20MJ 0027. Back cover has some light aging near the top – front is nice.)

I Believe To My Soul
Atlantic, 1966/1967. Near Mint-
LP...$14.99
One of the richest albums that Junior Mance ever cut for Atlantic Records – a smoking soul jazz set that seems to have a bit of a gospel influence too – at least in the deep, soulful bottom that comes from the feel of the group! Junior's piano is right on the money – as sharp and ... LP, Vinyl record album

Dizzy Meets Sonny (aka The Modern Jazz Sextet)
Verve, 1956. Near Mint- Gatefold
LP...$4.99
That's the Modern Jazz Sextet – not the Modern Jazz Quartet – although the group definitely borrows a bit of energy from the MJQ, and some personnel too! The group was only put together for this date – and combines the subtle touches of MJQ members John Lewis on piano and Percy ... LP, Vinyl record album