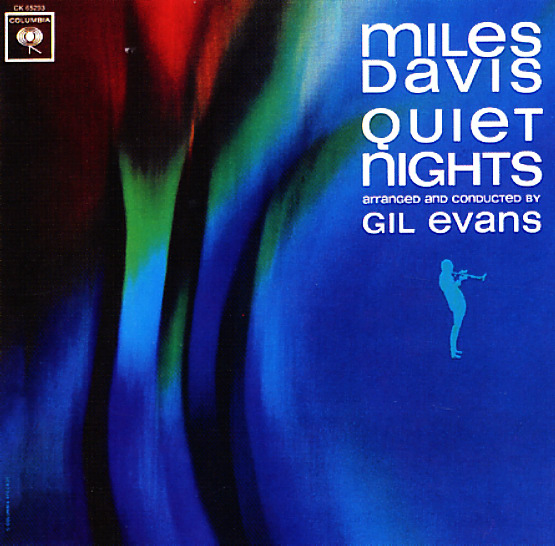 Also available
Miles Davis — Quiet Nights (Japanese pressing) ... CD 4.99
Miles Davis — Quiet Nights (with bonus track) ... CD 4.99
Moody magic from Miles Davis and Gil Evans – one of the pair's most perfectly poised albums together, and a set with a slight bossa nova undercurrent! Evans' shimmering horn patterns are in fine form here – complicated, but never in cold and too-modern ways – just the right sort of backdrop for Miles' muted solo work – blow with a great sense of space and care throughout! There's almost a soundtrack sort of depth to the record, but the solos still keep the jazz element nicely in focus – and titles include "Summer Night", "Wait Till You See Her", "Aos Pes Da Cruz", "Song #1", "Song #2", "Corcovado", and "Once Upon A Summertime".  © 1996-2023, Dusty Groove, Inc.
(Mono 2 Eye pressing. NOTE – Vinyl is pressed poorly on Side 2 and plays with loud surface noise. The rest plays VG-, with some crackles throughout. Cover has some surface wear, heavy wear at the corners, and some yellowing from age.)

Charles Mingus & Friends In Concert
Columbia, 1973. Very Good+ 2LP Gatefold
LP...$7.99
Mingus live is always a treat – especially in these later years, when the fire seemed to go out of most of his studio recordings. Live, though, he always managed to kick it hard - with the sort of emotion that graced his strong early albums. And despite the fact that this one's conducted by ... LP, Vinyl record album