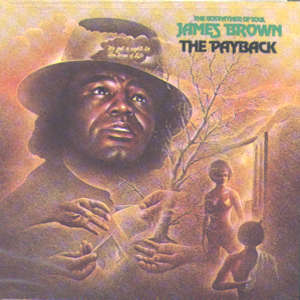 A masterpiece of funky soul – and one of the greatest albums of the early 70s! It all comes together on this one – funk, soul, politics, and production – and the record is still one of the clearest examples of James Brown's genius that you'll ever find! Recorded during the same sessions as the JBs album Damn Right I Am Somebody – Payback has the group backing James with amazing intensity, playing on and on for very long stretches, improvising jams that perfectly match the vocals, which are often as improvised as the music. The most famous example of this style at work is "The Payback", which begins with a simple head arrangement, then has James riffing off on politics and power, letting the band come in at just the right moment, dropping solos that are still some of the best ever recorded on a funk album. The rest of the album's equally great, and even though most tracks run close to 10 minutes, and the album's a 2LP set, most of the material stays fresher than any 3 minute funk record we've ever heard. Some tracks are separated by these cool voices that rise up as seques – and titles include "Stone To The Bone", "Mind Power", "Take Some Leave Some", and "Shoot Your Shot".  © 1996-2021, Dusty Groove, Inc.
(Original pressing with Sterling stamp. Cover has some ring and edge wear, 4 inch splits in the top seams, and small splits in the bottom seams.)

Sho Is Funky Down Here
King, 1971. Very Good
LP...$44.99
A legendary bit of fuzzy funk from James Brown – an important collaboration with the mighty Dave Matthews, who brings a more tripped-out feel to the record than some of James' other King sessions of the time! Matthews adds in lots of psych-influenced guitar – used very different than ... LP, Vinyl record album

Handful Of Soul
Smash, 1966. Very Good+
LP...$34.99
One of the best of Brother James' instrumental records for Smash, and a record that has him out front, wailing at the organ. While James has never been one of the true virtuosos of the instrument, he plays with a sense of style and adventure that make his best LPs sing with energy. This one's got ... LP, Vinyl record album

Ain't It Funky
King, 1970. Very Good-
LP...$19.99
A killer from James Brown – and one of his best instrumental albums of the King years! The record has James working with the pre-JBs James Brown Band – a tight assemblage of players who really know how to craft an off-kilter groove. The guitar's popping on the beat here as much as the ... LP, Vinyl record album

Love Tracks
Polydor, 1979. Very Good
LP...$7.99
THE lasting classic from Gloria Gaynor – the record that contains her tremendous hit "I Will Survive", and a great batch of disco grooves overall! The album's got a simple, honest sort of approach, despite its release in an era of overblown dancefloor sets – and arranger ... LP, Vinyl record album

Lifeline
Polydor, 1977. Near Mint- Gatefold
LP...$19.99 (LP...$19.99)
One of Roy Ayers' best-remembered albums of the 70s – a sublime blend of mellow numbers and some of his more club-oriented grooves of the time – all wrapped together with a genius that we can only describe as Ayers-like! The album's a beautiful example of the balance that Roy was ... LP, Vinyl record album

Alton McClain & Destiny
Polydor, 1978. Very Good+
LP...$9.99
Nice album of modern soul that was sort of lost at the time it came out, but which has been rediscovered by rare groovers over the past 10 years. The tracks have a bit of a jazzy vibe, and sound similar to some of the Creative Source tracks from around the same period. Titles include "It ... LP, Vinyl record album

Born Again
Cotillion, 1971. Very Good+ Gatefold
LP...$34.99
A sophisticated batch of jazzy tracks that really opens the group's style up way way past the stock form of some of their Brunswick recordings. The band's clearly taken on a more spiritual bent for this one – as you can probably guess from the Afro-madonna cover – and the music ranges ... LP, Vinyl record album