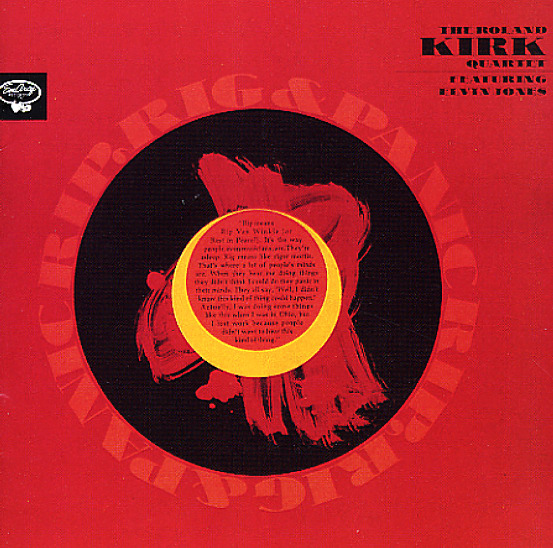 Mindblowing work from Roland Kirk – a record that really pushes the boundaries of his music even farther than some of his earlier, and excellent, albums for the Mercury label! Kirk's really stretching out here – finding a space in jazz that's uniquely his own – modern, yet playful – creative, yet never overindulgent – and perfectly balanced to find a whole new sound of soul for the 60s! Things never get too far outside, but Kirk's reedlines are always breaking out into fresh territory – incredible tenor parts, and also some amazing work on manzello and stritch too, both lesser-known reed instruments that Roland employs to incredible ends. Other group members fit his vibe perfectly – Jaki Byard on piano, Richard Davis on bass, and Elvin Jones on drums – each stepping quickly to catch the energy of each new twist and turn in Kirk's music. Titles include the sublime "From Bechet Byas & Fats" – plus "No Tonic Pres", "Rip Rig & Panic", "Mystical Dream", "Black Diamond", and "Slippery Hippery Flippery". This copy doesn't have the gatefold cover, but it's still got a nice textured one, and it's a second pressing from the 60's!  © 1996-2022, Dusty Groove, Inc.
(Pink label stereo pressing. Cover has some wear and aging, thin tape remnants and some peeling at about an inch in from the opening, half split spine, and some seam splits.)

Domino
Mercury, 1962. Very Good+
LP...$44.99
A key early album from reedman Roland Kirk – at set that really has him strongly finding his voice in jazz, and transforming most of modern music in the process! The set's a perfect illustration of the way that Roland could swing with soul, yet still reach out with bold new ideas too – ... LP, Vinyl record album

Les McCann Plays The Hits
Limelight, 1966. Near Mint-
LP...$14.99
Play the hits Les does – but in a very groovy way! He's got a nice little combo on the record that includes Plas Johnson and Seldon Powell on saxes, plus some Latin percussion by Johnny Pacheco and Ron Rich. The great Leroy Vinnegar rounds out the group on bass, providing the rich strong ... LP, Vinyl record album