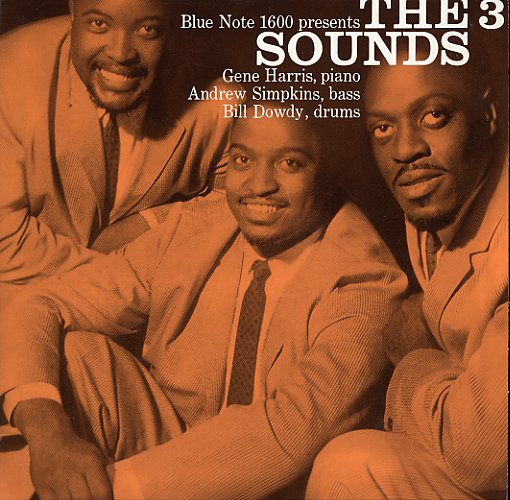 Also available
Three Sounds — Three Sounds (Blue Note 1600) (with bonus track) ... CD 12.99
Great early work by the Three Sounds, before they'd lapsed a bit too much into their formulaic trio style on Blue Note – and when they were adding some excellent little flourishes to the music to distinguish themselves from the rest of the crowd. Drummer Bill Dowdy's in great shape here, working his way across the kit with the ferocity of a bossa drummer – adding in lots of great fills that bring out the best in Gene Harris sharp piano work. Plus, the album even features a bit of Harris on the celeste – creating a cool vibes-y sound on the track "Blue Bells". Other titles include "O Sole Mio", "Goin Home", "It's Nice", and "Both Sides". CD features an alternate take of "Goin Home".  © 1996-2023, Dusty Groove, Inc.
(On CDr demand pressing.)

Three Sounds (Blue Note 1600) (with bonus track)
Blue Note, 1958. Used
CD...$12.99 (CD...$6.99)
Great early work by the Three Sounds, before they'd lapsed a bit too much into their formulaic trio style on Blue Note – and when they were adding some excellent little flourishes to the music to distinguish themselves from the rest of the crowd. Drummer Bill Dowdy's in great shape here, ... CD