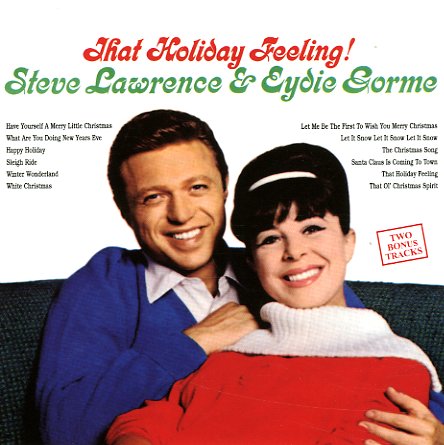 That Holiday Feeling (with bonus tracks)

Nobody does the Holidays like Steve & Eydie – serving up the goods with that perfect blend of swing and schmaltz that sounds great during the eleven other months of the year, but somehow sounds especially nice at Christmas! Maybe it's the way they interact – which reminds us a lot of the kind of Holiday TV performances we grew up with – or maybe it's the way that Eydie somehow bubbles over with enthusiasm at these weirdly unexpected moments – as if she's hearing some of these seasonal classics for the very first time. Arrangements are by Don Costa, Al Cohn, and Pat Williams – and some tracks feature the pair together, some feature either Steve or Eydie on their own. Titles include "What Are you Doing New Year's Eve", "Sleigh Ride", "Winter Wonderland", "White Christmas", "Let It Snow", "The Christmas Song", "Santa Claus Is Coming To Town", and "Have Yourself A Merry Little Christmas". Great expanded edition – with bonus tracks that feature the pair singing "Hurry Home For Christmas" and "Baby It's Cold Outside" – plus Steve on "The First Noel", "Go Tell It On The Mountain", "White Christmas", and "Twas The Night Before Christmas" – and Eydie on "My Favorite Things" and "It Came Upon A Midnight Clear".  © 1996-2022, Dusty Groove, Inc.

Snowfall – The Christmas Album
Columbia, Late 60s. New Copy
CD...$4.99 6.98 (CD...$2.99)
Killer Christmas work from Tony Bennett – a set recorded in the 60s, but a classic that endures strongly over the years! Tony's vocals are superb here – that nicely matured style that's kept him in front of younger ears over the years – and the backings are somewhat traditional, ... CD