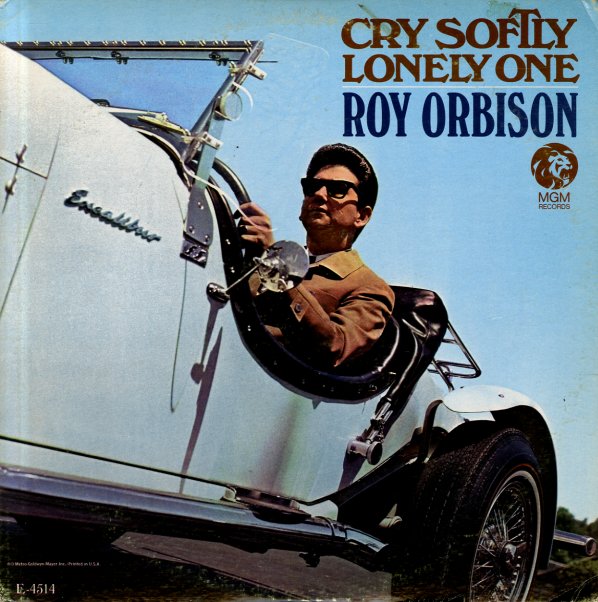 Roy Orbison is looking mighty cool on the cover, and he's sounding pretty darn cool here – elevated to late 60s rock majesty with a sense of power and presence that's maybe even stronger than his earliest material! Roy's voice is fantastic, and gets some superb handling in arrangements from Jim Hall and Bill McElhiney – often big, but very subtle – so that that majestic Orbison style resonates strongly right out front, in a set of tunes that also includes a huge chunk of original material by Roy too! Titles include the great "Cry Softly Lonely One" – plus "Communication Breakdown", "It Takes One To Know One", "Just Me Make Believe", "Only Alive", "Time To Cry", "That's A No No", and a version of the Mickey Newbury tune "Here Comes The Rain Baby".  © 1996-2023, Dusty Groove, Inc.

Memphis
MGM/Universal, 1972. New Copy (reissue)
LP...$11.99 24.99
An overlooked gem from the early 70s years of Roy Orbison – a time when the singer's voice was still impeccable, and a record like this offered a new vista for his unique style of expression! The title's a reference to a nice cover of the Chuck Berry tune that Orbison kicks off at the start ... LP, Vinyl record album

To Bring You My Love
Island, 1995. New Copy (reissue)
LP...$20.99 24.99
The one that catapulted PJ Harvey from a critical favorite to something of a popular favorite on both the US and UK – and her most remarkable creative stride to date! At the time, it felt like this was the one where Polly Harvey made a conscious choice to go "big" with sound, ... LP, Vinyl record album

Exile On Main Street (180 gram pressing – half speed master)
Universal, 1972. New Copy 2LP Gatefold
LP...$36.99 39.99 (LP...$44.99)
The Rolling Stones at their rawest, most shambling, sleazy and brilliant – the epic, unimpeachable Exile On Main Street! What can we say about one of the most iconic LPs of all time other than chime in with our agreement that it's one of the greatest rock albums ever! Big choruses come and ... LP, Vinyl record album

Machibouke
Universal/Lawson (Japan), 1973. New Copy (reissue)
LP...$42.99 49.99
A beautiful little record from the Japanese scene of the 70s – a set that shows the growing influence of the American singer/songwriter world, but at a point before things hit the more polished mode of the city pop generation! Makoto Kubota has this nicely dark style to his work – ... LP, Vinyl record album

Animalization (180 gram pressing)
MGM/Abkco, 1966. New Copy (reissue)
LP...$28.99 29.99 (LP...$16.99)
A record that has The Animals at the crossroads – working without the piano and organ of Alan Price, but with an even more rising sense of power from Eric Burdon – who's really coming into his own as a singer, and turning out to be a surprisingly great songwriter too! The group still ... LP, Vinyl record album