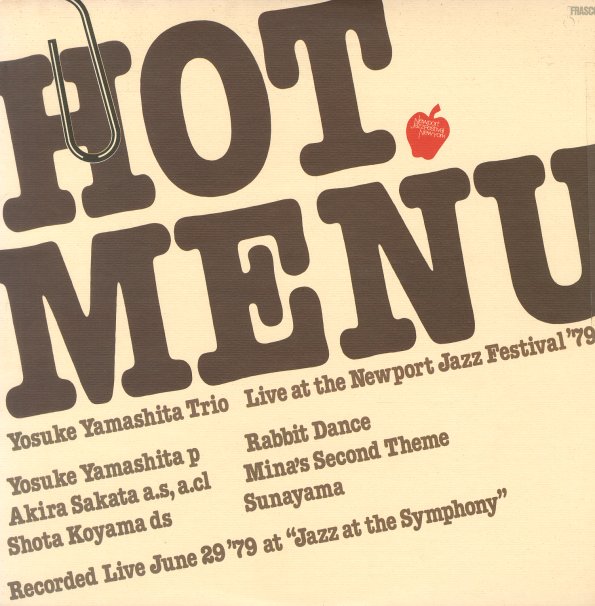 A New York performance by the legendary pianist Yosuke Yamashita, but one that burns every bit as strongly as his famous albums from Japan – thanks in part to some really incredible work from Akira Sakata on alto and clarinet! There's few folks who could ever hope to match the Cecil Taylor-like energy of Yamashita on the piano, but Sakata always seems to rise to the challenge wonderfully – and with the drums of Shota Koyama along for the ride, the trio must have left the New York audience with their jaws on the floor – especially as most of the US had not been able to get access to Yosuke's records at the time. The set features three very long tracks – "Rabbit Dance", "Mina's Second Theme", and "Sunayama".  © 1996-2022, Dusty Groove, Inc.
(SHMCD pressing!)

Figure Of Yosuke Yamashita Vols 1 & 2
Frasco/Universal (Japan), 1981. New Copy 2CDs
CD...$29.99 34.99
A really wonderful shift in sound for pianist Yosuke Yamashita – material that's still as full of energy and life as some of his groundbreaking trio sessions of the 70s, but which pitch the spirit in a slightly different way! Volume one of the set has songs that are maybe a bit tighter and ... CD

Rhapsody In Blue
Kitty/Universal (Japan), 1986. New Copy
CD...$18.99 22.99
A slightly more serious session than usual from pianist Yosuke Yamashita – and a record that shows off his tremendous keyboard talents from a completely different perspective than the avant, outside work we usually know! Much of the material here features Yamashita playing solo – ... CD