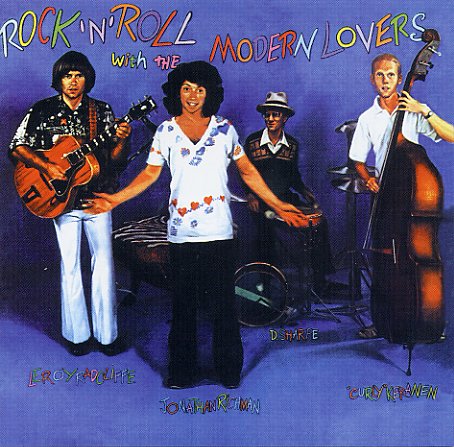 Rock & Roll With The Modern Lovers

Also available
Modern Lovers — Rock & Roll With The Modern Lovers ... LP 31.99
Raw, sweet, deadpan pop songs about summer mornings, the ice cream man, rollercoasters, and cars from the strangely whimsical Jonathan Richman! This is Jonathan's third album for Beserkely (and the second to come out in early '77) – and the true beginning of the second phase of his career, which cast him as an oddball manchild who rattled out weird, three chord tunes about whatever seemed to be going through his development-arrested mind at the time. It's all still very sweet, very catchy, and all about acoustic stream of consciousness cuteness. This was all still very amazing in the mid 70s – well before tongue-in-cheek hipsters like the Violent Femmes used Richmond-esque quirkiness as pure gimmickery. It may a notch below his previous couple of classic albums – but Rock And Roll is still a gem! "The Sweeping Wind", "Ice Cream Man", "Summer Morning", "Fly Into Mystery", "Roller Coaster By The Sea", "Coomyah", "Egyptian Reggae", and "The Wheels On The Bus".  © 1996-2023, Dusty Groove, Inc.

Jonathan Richman & The Modern Lovers
Beserkley/Omnivore, 1976. New Copy
CD...$15.99 18.99
The second album from the Modern Lovers – but one that's completely different than the first! In an oft-told story, Jonathan Richman had a complete musical turnaround in the space between the records – shirking off the proto-punk of his roots (which was also a huge inspiration to the ... CD

Live In Cuxhaven 1976
Mute/Spoon, 1976. New Copy
CD...$14.99 15.99 (LP...$34.99)
A searing slice of live energy from the mighty Can – an extended concert performance that shows just how different some of the group's live material was compared to their studio recordings – especially at this time when they were tightening things up slightly for their records! As fans ... CD