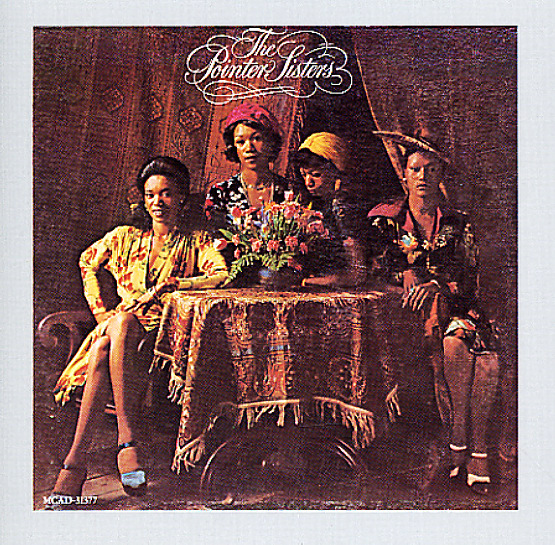 The fantastic debut of The Pointer Sisters – an album that's a lot deeper than most of their crossover pop from years to come! At the time of the album's release, the trio were a badass group of female singers on the Bay Area scene – out to redefine the role of the girl group in soul – working not only with righteous power that was a real change from modes of the 60s – but also this trans-temporal quality that had them reaching back with ease for references from decades past, which also includes a surprising amount of jazz! The highlight here is the group's classic funky break version of Allen Toussaint's "Yes We Can Can" – and other titles include "Naked Food", "Wang Dang Doodle", "Sugar", "Pains & Tears", "Jada", "River Boulevard", and "Cloudburst".  © 1996-2021, Dusty Groove, Inc.
(Cover has some light surface and edge wear, a trace of a price sticker, and some aging.)

Serious Slammin
BMG, 1988. Sealed
LP...$4.99
Some serious slammin from The Pointer Sisters – still going strong here, near the end of an amazing run of records done with producer Richard Perry! The late 80s vibe is definitely in place – as the beats are a lot more upfront than previously for the trio – a bumpin, thumping ... LP, Vinyl record album

Sweet As Funk Can Be
Cadet, 1972. Near Mint-
LP...$14.99
A wonderful record from the Dells – with stellar Cadet production and arrangements by Charles Stepney! This one has a very cool way of putting the tracks together, so that there's these little "segues" in between each cut – short instrumental grooves that are actually quite ... LP, Vinyl record album

Fife Piper
HBR, 1966. Near Mint-
LP...$14.99
Obscure album of flute-based instrumental soul tracks, recorded as one of the few soul LPs for the long-lost Hanna-Barbera label. The title cut – "The Fife Piper" – was a nice funky 45 for the group, and you may have heard it before, but there's a lot of other nice cuts on ... LP, Vinyl record album

City Life
Fantasy, 1975. Near Mint- Gatefold
LP...$34.99
A fantastic album from this legendary jazz funk combo – a bit smoother than their first, but that's the great thing about it! The record has the band getting even tighter than before – coming up with an amazing jazz-inflected funk groove that still leaves us breathless after all these ... LP, Vinyl record album

Crazy Little Mama
Vee Jay, Late 50s. Good
LP...$49.99
Insanely wonderful doo-wop material from this legendary Chicago group – one of the few truly great full length albums in a mostly singles-dominated genre! The title track is well known not only for the original, but for a later famous sample by De La Soul – and it's a great example of ... LP, Vinyl record album