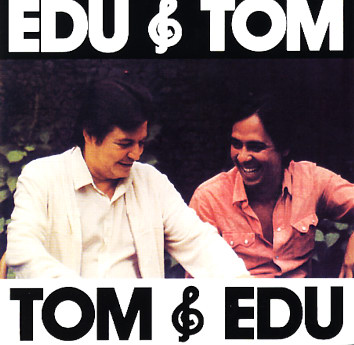 An incredible later meeting by two of the most sophisticated musical talents of the bossa generation – and a record that's done in the same intimate, spare setting as Jobim's meeting with Elis Regina a few years before! Production is by bossa legend Aloysio De Oliveira – and the sound is relatively clean and simple – often just a bit of piano, guitar, and percussion behind the up-close and personal vocals of the tunes. Lobo & Jobim sing together on most of the record – in a double-voiced style that's almost a bit like that used on Jobim's incredible Matita Pere record from the 70s. Edu sings solo on "Chovendo Na Roseira", Tom sings solo on "Angela" – and the pair duet on the tracks "Canto Triste", "Vento Bravo", "Moto Continuo", "Pra Dizer Adeus", "Ai Quem Me Dera", and "Luiza".  © 1996-2022, Dusty Groove, Inc.
(Out of print, 2007 Japanese pressing – includes obi!)