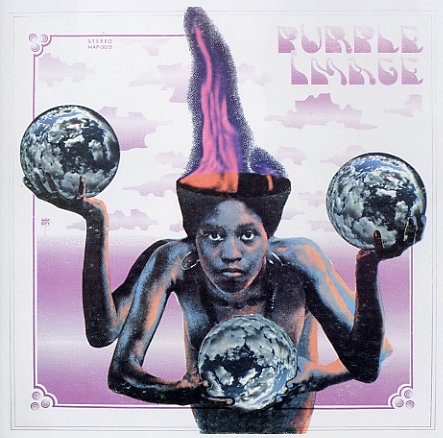 A key album in the post-Hendrix tradition of funky black rock – and the only album ever recorded by Cleveland's Purple Image! The approach here follows nicely in the same territory worked by Funkadelic and Fugi in the early days – a heady, fuzzed-up blend of trippy guitars, heavy rhythms, and some nice sweeter soul touches – all in a mode that swings nicely between really messed-up tunes, and others with a lighter, more soul-based approach. Side two of the record is dominated by the great jamming track "Marching to a Different Drummer" – easily enough to rival anything on Funkadelic's Free Your Mind album – and other cuts include "Living In the Ghetto", "Why", "Lady", and "We Got To Pull Together".  © 1996-2022, Dusty Groove, Inc.
(Limited edition of 250 – on heaveyweight silver vinyl!)

Kalapana II (blue vinyl pressing)
Abattoir/Aloha Got Soul, 1976. New Copy (reissue)
LP...$25.99 28.99
The sweet second album from this legendary Hawaiian soul group – maybe the island state's biggest musical export at the time, and for good reason too! Kalapana work here with the same tropical soul mode as their debut, but tighten things up in all the right ways – by stepping into a ... LP, Vinyl record album