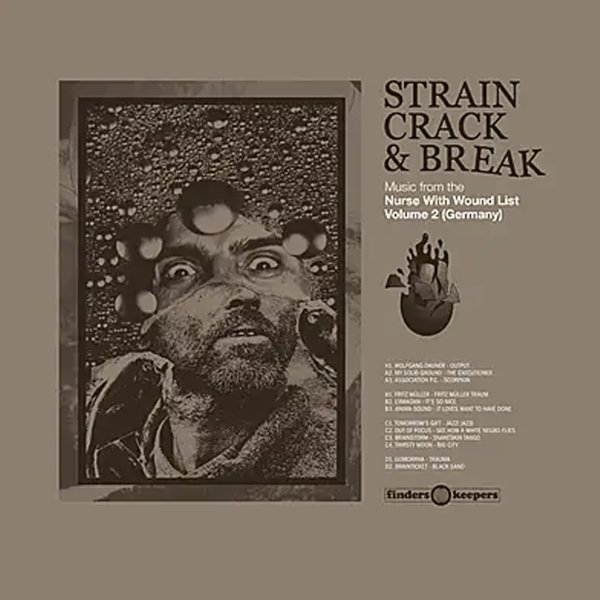 Wild sounds in a range of different styles – jazz, rock, and more outside modes – all served up in support of a legendary list made years ago by the group Nurse With Wound! The list was a secret guide to all things weird and unusual – put together decades back, and now famous as kind of a Rosetta Stone for stepping into music from the farther left side of the spectrum – here served up from a range of German recordings from back in the day, most recorded during a key moment when the scene was really breaking down boundaries in styles! There's a fair bit of electric elements here, and you'll recognize a few artists as being heroes from the prog and MPS generations – on titles that include "Fritz Muller Traum" by Fritz Muller, "Jazzi Jazzi" by Tomorrow's Gift, "Output" by Wolfgang Dauner, "Black Sand" by Brainticket, "Trauma" by Gomorrha, "Big City" by Thirsty Moon, "Snakeskin Tango" by Brainstorm, "Scorpion" by Association PC, "The Executioner" by My Solid Ground, "It Loves Want To Have Done" by Anima Sound, and "It's So Nice" by Ex Magma.  © 1996-2022, Dusty Groove, Inc.

Midnight Massiera – The B-Music Of Jean-Pierre Massiera
Finders Keepers (UK), Late 60s/1970s. New Copy
LP...$24.99 30.99
Mad music from Jean-Pierre Massiera – the legendary producer who was steeped in the hippest sounds of the French scene of the 60s, then moved to Quebec to forge a wild style that was all his own! Jean-Pierre rarely ever issued work under his own name – and instead recorded under a host ... LP, Vinyl record album

Science Fiction Dance Party – Dance With Action
Metronome/Finders Keepers (UK), 1971. New Copy (reissue)
LP...$22.99 28.99
A really amazing record – even more incredible than you might guess from the cover and title! The whole thing's definitely a "party" in sound – as the record takes lots of familiar instrumentation and mixes it with odd sound effects and weird production tricks – ... LP, Vinyl record album