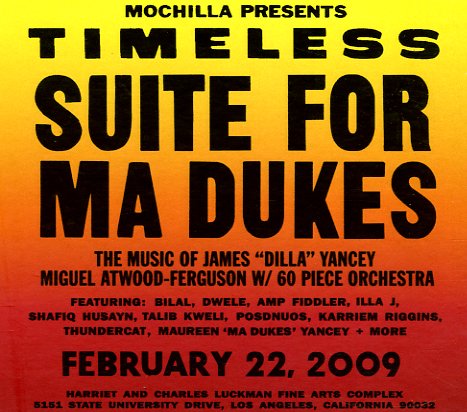 J Dilla was always way more than just a hip hop artist – a visionary creator who was taken from us all too soon, given strong tribute here by the mighty talents of Miguel Atwood Ferguson – a contemporary of Dilla, and a similarly visionary talent! The music here was recorded live – a masterful blend of 60 musicians reworking some key cuts from the catalog of Dilla – in tribute both to his talents, and the warmth of his mother, who was with him when he passed – given great help from a large array of guests – including Shafiq Husayn, Amp Fiddler, Bilal, Dwele, Illa J, Karriem Riggins, Posdnous, and Talib Kweli. The music here is light years from its original hip hop roots – proof of all the many musical channels that J Dilla could help unlock – and tracks include "Morning Order", "Antiquity", "Le Yachting", "Untitled/Fantastic", "Welcome 2 Detroit", "Gobstopper", "Affolements Grantiques", "Don't Nobody Care About Us", "Jealousy", "Angel", "Reminisce", "Stakes Is High", and "Fall In Love".  © 1996-2021, Dusty Groove, Inc.
(Limited release – with bonus liner notes and interview with Ma Dukes herself!)