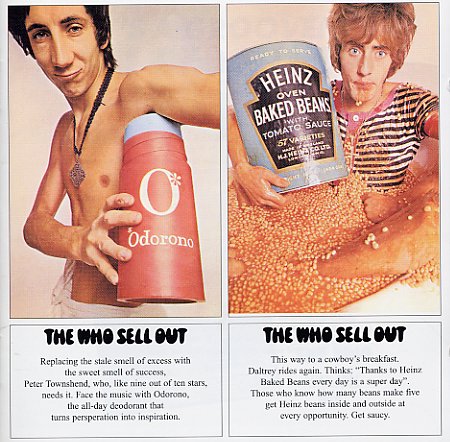 Who Sell Out (2LP set – with bonus tracks)

An incredible album – and one of the most revolutionary rock albums of the late 60s! The Who recorded this one as a tribute to mainstream radio at the time – linking together some solid stand alone tunes with shorter, wittier tracks that were recorded as commercials for products that included baked beans, acne cream, and deodorant – as well as cool announcer bits too! The end result is one of the most sonically complex records issued by a mainstream rock act of the time – sort of like The Who said "yeah, everyone's trying to copy Sgt Peppers with big arrangements, but we'll take this concept album thing in a whole new direction!" Brilliant all the way through, and with tracks that include "Armenia City In The Sky", "Heinz Baked Beans", "Mary Anne With The Shaky Hand", "I Can See For Miles", "I Can't Reach You", "Rale", "Sunrise", and "Silas Stingy". Great 2LP pressing – the whole album in a brand new stereo mix, plus 12 more bonus tracks!  © 1996-2021, Dusty Groove, Inc.
(Comes with a bonus psychedelic poster, and new notes by Pete Townshend!)