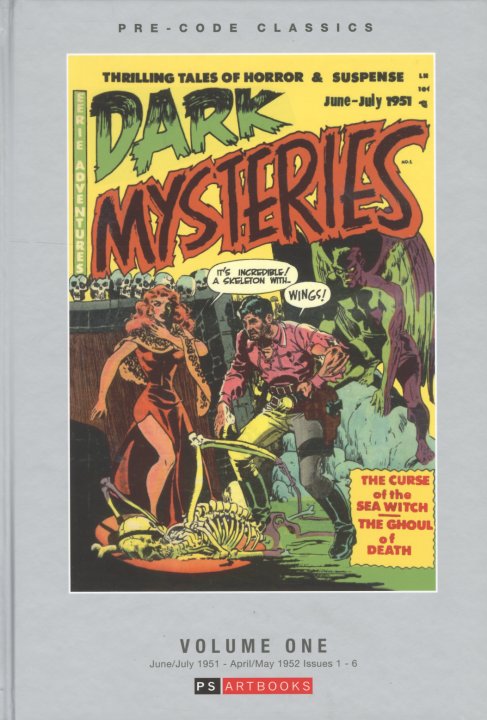 Dark Mysteries promises "eerie adventures" and it definitely lives up to that promise – as the book is filled with very creepy stories from the glory days of postwar horror comics! The publication ran alongside the early days of EC Comics horror, and also features some of that company's artists too – but was always a bit more stark and rough around the edges, which makes the eerie adventures inside seem even more spooky by comparison! There's plenty of skeletons and ghouls within – the kind of dark alley tales that made the world of early 50s America feel like it was about to become a playground for the supernatural. Artwork in this volume is by Wally Wood, Joe Orlando, Lou Cameron, Vince Napoli, Bill Fraccio, Hy Fleishman, and others.  © 1996-2021, Dusty Groove, Inc.

Dark Mysteries Collected Works Vol 2 – June/July 1952 to June 1953 – Issues 7 to 12 (hardcover)
PS Artbooks (UK), Early 50s. New Copy
Book...$9.99 49.99
Dark Mysteries promises "eerie adventures" and it definitely lives up to that promise – as the book is filled with very creepy stories from the glory days of postwar horror comics! The publication ran alongside the early days of EC Comics horror, and also features some of that ... Book

Ghostly Weird Collected Works – September 1953 to September 1954 – Issues 120 to 124 (hardcover)
PS Artbooks (UK), Early 50s. New Copy
Book...$9.99 49.99
A book that's worth it alone for the covers – which are handled by the horror great, LB Cole – and one that also features some pretty amazing contents too! As you might guess from the cover image, Ghostly Weird was one of the more striking titles of the pre-code horror generation ... Book

Weird Horrors Collected Works Vol 1 – June 1952 to December 1952 – Issues 1 to 5 (hardcover)
PS Artbooks (UK), Early 50s. New Copy
Book...$9.99 49.99
There's plenty of weird horrors within – ghosts, ghouls, and even a Medusa head – served up here in a nicely gritty style! Weird Horrors was one of those comics that liked to shock with hints at a variety of inside stories on the front cover – a bit like mid 50s Marvel ... Book

Web Of Mystery Collected Works Vol 1 – February 1951 to December 1951 – Issues 1 to 6 (hardcover)
PS Artbooks (UK), Early 50s. New Copy
Book...$9.99 49.99
The "mystery" in the title is very well-placed here – as Web Of Mystery did a great job of mixing together postwar horror and mystery modes – often beginning each tale like some sort of parlor detective story, with a key question at the forefront – before then moving ... Book

Strange Terrors Collected Works Vol 2 – January 1953 to March 1953 – Issues 6 to 7 (hardbound)
PS Artbooks (UK), Early 50s. New Copy
Book...$9.99 49.99
With a name like Strange Terrors, you know this stuff's going to be creepy – and the rare comics within definitely live up to that promise! The publication is one of the most obscure from the world of postwar horror comics – and features lots of weird and unusual work from those late ... Book

Witches Tales Vol 2 – March to September 1952 – Issues 8-14 (hardcover)
PS Artbooks (UK), 1952. New Copy Book
Book...$9.99 47.99
Witches Tales and a whole lot more – a wonderfully creepy assortment of stories from the pre-code horror years of the 50s – a time when anything was possible in the world of comics! Witches Tales was one of a handful of notorious publications from Harvey – who had a brief but ... Book

This Magazine Is Haunted

This Magazine Is Haunted Collected Works Vol 4 – Charlton Series 1957 – Issues 12 to 16 – July 1957 to may 1958 (hardcover)
PS Artbooks (UK), Late 50s. New Copy
Book...$9.99 49.99
A fantastic entry in the world of 50s horror comics – a publication that never got much circulation at the time, but which has gone onto become the stuff of legend, thanks to its creepy stories and early artwork from a host of later comics giants! The publication was one of a few great ... Book

Forbidden Worlds Collected Works Volume 12 – Issues 71 to 76 – October 1958 to March 1959 (hardcover)
PS Artbooks (UK), Late 50s. New Copy
Book...$9.99 49.99
Great work from the comics code run of the legendary Forbidden Worlds – a time when this important early horror book moved into heavy sci-fi territory, but barely missed a beat at all! Instead, the comic almost seemed to hit a new sort of stride – as the stories by the great Richard ... Book

Tomb Of Terror Vol 2 – January to September 1953 – Issues 7-11 (hardcover)
PS Artbooks (UK), 1953. New Copy Book
Book...$9.99 47.99
We love 50s horror comics – and we especially love Tomb Of Terror – as it's one of the excellent publications from Harvey Comics in the pre-code years – filled with lurid artwork and some incredibly chilling stories! Like some of the other Harvey horror of the period, there's a ... Book

Adventures Into The Unknown Collected Works Volume 12 – August 1955 to July 1956 – Issues 65 to 71 (hardcover)
PS Artbooks (UK), Mid 50s. New Copy
Book...$9.99 49.99
Stunning work from the glory days of the 50s horror comic – issues of the legendary publication Adventures Into The Unknown – one of the first and most important comics to plumb the depths of supernatural and science fiction! The publication inspired countless imitators, but was always ... Book

Adventures Into Darkness Collected Works Vol 2 – June 1953 to June 1954 – Issues 10 to 14 (hardcover)
PS Artbooks (UK), Early 50s. New Copy
Book...$9.99 49.99
Creepy comics galore – of the sort that made the industry create the comics code to protect young readers from material like this! The collection brings together rare issues from this obscure Standard Publications title – all in full color, including the covers – and even ... Book

Unseen Collected Works Vol 2 – August 1953 to July 1954 – Issues 11 to 15 (with bonus issue Who's Next January 1953 Issue 5) (hardcover)
PS Artbooks (UK), Early 50s. New Copy
Book...$9.99 49.99
The Unseen has been unseen for decades – a short-lived publication that was part of the big pre-code horror comics boom of the early 50s – but this book brings back vintages issues in all their glory – complete with full color reproductions of all the stories, covers, and vintage ... Book