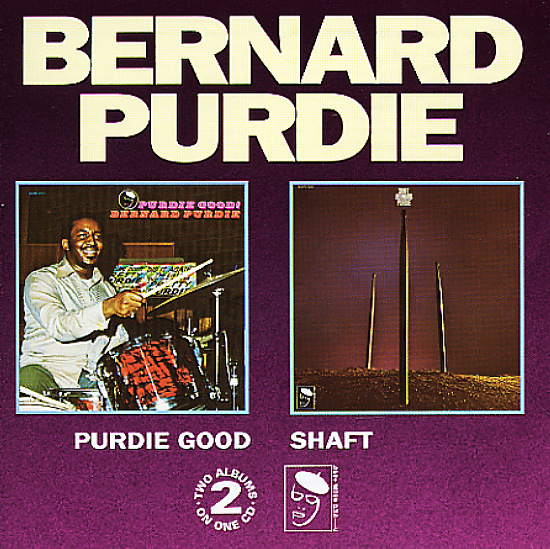 2 funky classics from the legendary Pretty Purdie! Purdie Good is Bernard Purdie's first album as a leader for Prestige – cut right after he'd hipped up plenty of other sessions for the label with his famous funky drums! The groove here is very much in the best Prestige jazz funk mode of the early 70s – tightly vamping rhythms that draw heavily from Purdie's monstrous drums – and which also offer solo showcase space for Harold Wheeler on electric piano, Ted Dunbar on guitar, Tippy Larkin on trumpet, and Charlie Brown and Warren Daniels on tenor. Rhythm is augmented by Gordon Edwards on Fender bass and Norman Pride on congas – and the grooves hit a variety of modes that show that Purdie could sometimes be a more open-thinking rhythmatist than his funky contemporary Idris Muhammad. Titles include great instrumental versions of "Cold Sweat" and "Montego Bay", plus the originals "Wasteland", "You Turn Me On", and "Purdie Good". Shaft is a full funky session from master drummer Bernard Purdie – a set that expands out his previous Prestige vibe, and almost goes for a soundtrack scope to match the record's Shaft title! The set leads off with a great take on the Isaac Hayes hit – one that follows in the same fully-flowing, slow-building mode as Ike's – but which comes across here as an instrumental with some great solo work from Houston Person – playing here almost in a Stanley Turrentine sort of mode! Other tracks continue the hip mix of jazz and larger backings – and feature a lineup of players that includes Neal Creque on electric piano, Gerry Thomas and Danny Moore on trumpets, Willie Bridges and Houston Person on tenors, Billy Nichols and Lloyd Davis on guitars, Gordon Edwards on Fender bass, and Norman Pride on congas. The sound is warm without ever sounding too smooth – and Purdie's funky drums at the bottom ensure that most tunes are nicely lively. Titles include "Shaft", "Butterfingers", "Summer Melody", "Changes", "Way Back Home", and "Attica".  © 1996-2023, Dusty Groove, Inc.