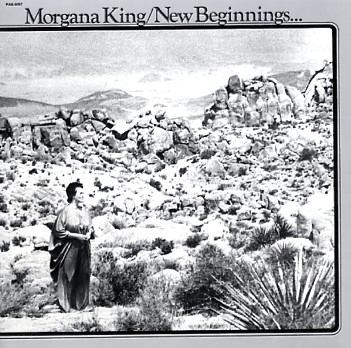 A completely hip little record from Morgana King – one that takes her amazing voice, and sets it amidst some expansive arrangements that push past jazz to include some trippier 70s styles! The whole session's got a nice mix of the mellow and baroque – with a subtle funky undercurrent at points, and definitely a fair bit more soul than we're used to hearing from Morgana! Arrangements are by Torrie Zito and Bob James – and the production often compresses the vocals in a really cool way – sliding them amidst the instrumentation with a haunting quality that's hard to describe in words, but which makes the album one of King's most breathtaking ever! The back cover has Morgana getting props from Donny Hathaway, Stevie Wonder, Paul Williams, and Kenny Rankin – all names we can certainly trust – and titles include a great version of "We Could Be Flying", "All In All", "A Song For You", "Like A Seed", and "The Sands Of Time & Changes".  © 1996-2021, Dusty Groove, Inc.
(Cover has some wear and light stains.)