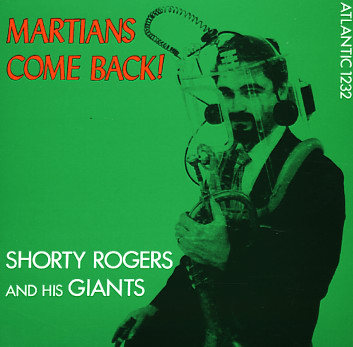 One of Shorty Rogers' greatest records – and a very nice set of tight west coast arrangements that really shows off the Rogers sense of sparkle and swing – a vibe that definitely comes through in the famous cover image too! Shorty wrote nearly all of the tracks, and the writing's a great example of the good side of the west coast style – when the tightness of arranging is used to bring out the best elements in the players, and bend them around in some nice twists and turns, with good solos, and lots of nice little surprising bits. And in this case, the players are all great – with Jimmy Giuffre and Bud Shank on reeds, Pete Candoli and Don Fagerquist on trumpets, and Lou Levy on piano. Titles include "Lotus Bud", "Martians Come Back", "Chant Of The Cosmos", and "Astral Alley".  © 1996-2021, Dusty Groove, Inc.
(Mono black label pressing with deep groove. Cover has discoloration from age and some wear.)