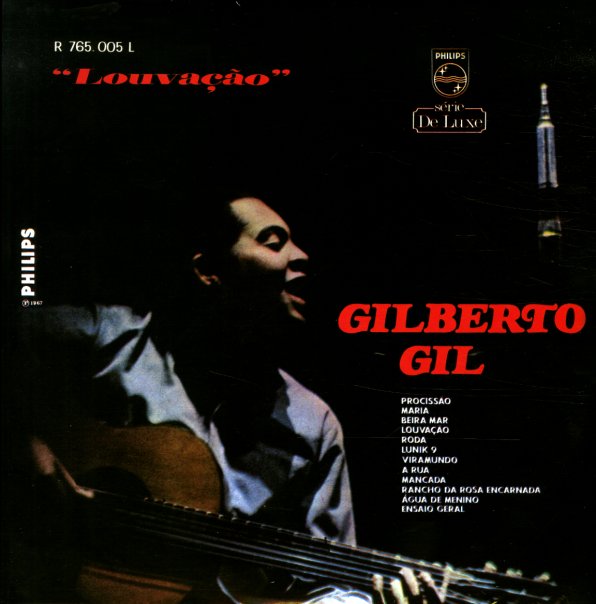 A brilliant early moment for the young Gilberto Gil – a set recorded right before his jump into the Tropicalia movement, but with a sound that's already pretty darn unique! The style here has Gilberto singing upfront and playing acoustic guitar – in a mode that's certainly rooted in bossa nova, but which really moves past its basic approach – showing some of the deeper, darker, more sophisticated tunes you'd find in similar early music by Nara Leao or Gal Costa! The songwriting is superb – of the sort that already had many others picking up some of Gil's important early tunes for their own recordings – and there's a nice nod to deeper Brazilian roots in some of the arrangements, particularly the regions that were sometimes pushed into the corners of the culture. Arrangements are by Dori Caymmi and others – and titles include Gil's classic "Roda", which was covered by many artists, but done brilliantly here in the original – plus "Lovacao", "Maria", "Ensaio Geral", "Lunik 9", and "Procissao" – all early classics!  © 1996-2022, Dusty Groove, Inc.
(Out of print.)

Gilberto Gil Unplugged
Warner (Brazil), 1994. Used
CD...$12.99
One of the first great Brazilian entries in the Unplugged series – and proof that that format worked as good as (if not better than) it did for American artists! Gilberto kicks back with a nice little combo – playing acoustic guitar and bringing a gently soulful groove to tunes that ... CD

To Be Alive Is Good (Anos 80)
Warner (Brazil), 1980s. Used
CD...$6.99 9.99
A great collection of work by Gilberto Gil – tracks recorded throughout the 80s, and done in a variety of styles, all of which show him at his best during the time! Lots of the tunes step off the smooth soul and funkier modes of the late 70s, taking Gil into the strongly R&B-influenced ... CD

Parabolic (aka Parabolicamara)
Warner/Tropical Storm, 1991. Used
CD...$4.99
Gilberto Gil's still got a nicely sharp edge here on this great set from the late 80s – a record that broke bigger than most of his others from the decade, at least on a global scale – and an album that showed the world that Gil still had plenty of energy and new ideas to offer! There's ... CD