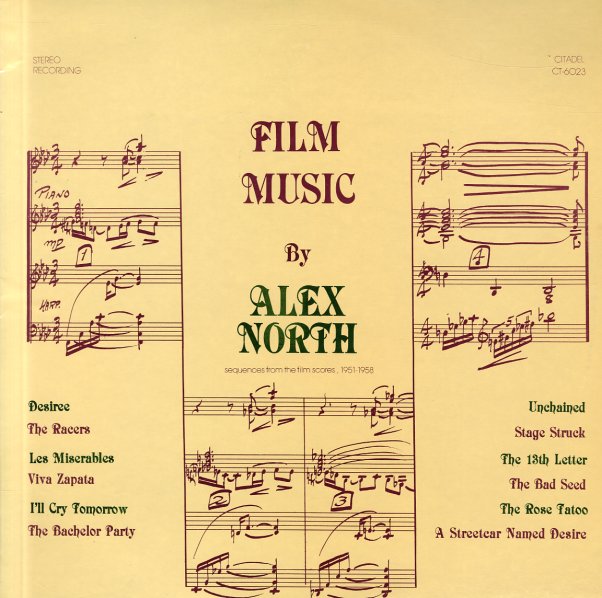 Africa
MGM, Mid 60s. Very Good+
LP...$2.99
A pretty serious orchestral score by Alex North, designed to accompany an ABC documentary about the changes in Africa during the 60s. Given that the documentary takes a look at the emerging politics and cultures in post-colonial Africa, it's amazing how white and western the soundtrack is – ... LP, Vinyl record album

Walk With Love & Death
Citadel, 1969. Very Good+
LP...$4.99
More serious than most of Delerue's soundtracks – and mostly historically themed, in keeping with the film's setting in 14th Century France. Most tracks mix orchestral backing with spare recorder solos or percussion – and titles include "Heron Arrives At The Sea", "Heron ... LP, Vinyl record album

Peter Gunn
RCA, 1959. Very Good-
LP...$4.99 (CD...$1.99)
A classic! This is the record that made Mancini's career, and forever transformed the face of crime and jazz. The record's a stunning batch of instrumentals, played by a crack group of west coast players who also performed regularly in the TV show. Titles include the classic "Peter ... LP, Vinyl record album

Bullitt – Original Soundtrack
Warner, Late 60s. Near Mint-
LP...$19.99
Fantastic stuff! In case you don't know it, this is one of Lalo Schifrin's most incredible soundtracks, and it's a stunning mix of jazz, bossa, and groovy grooves. There's lots of cool bubbling electric bass, lilting keyboards, and moody breezy rhythms. Nearly every cut's a winner, and if you ... LP, Vinyl record album

Music From Mr Lucky
RCA, 1959. Near Mint-
LP...$6.99
One of the greatest soundtracks ever from the early years of Henry Mancini – a hip jazzy TV score that we've loved for years! The jazzy theme to "Mr Lucky" is reason enough to buy this album – as it's got these wonderful warm washes of sound, interlayed in a way that makes ... LP, Vinyl record album

Wild Bunch – Original Soundtrack
Warner, 1969. Near Mint-
LP...$9.99
A surprisingly poignant score – especially when you consider that it was written for a film that was known for its graphic violence! Jerry Fielding's at his height here – drawing on his earlier work in jazz, yet weaving together colors and tones that work with really bold imagistic ... LP, Vinyl record album

Bell, Book, & Candle – Original Soundtrack Recording
Colpix, 1959. Very Good+
LP...$34.99
A wonderful jazzy soundtrack from the end of the 50s – written for the ultra-cool film Bell, Book, & Candle – which starred Kim Novak and Jimmy Stewart in a comedy about beatnik witches in New York! Much of the soundtrack has a cool beat jazz sort of feel to it – and many ... LP, Vinyl record album

Carny
Warner, 1980. Very Good+
LP...$3.99
Music from a film that also starred Robbie Robertson on the screen – along with Jodie Foster and Gary Busey! Side one features songs by Robertson – vocal numbers that include "Rained Out", "Sawdust & G Strings", "Garden Of Earthly Delights", "Pagan ... LP, Vinyl record album