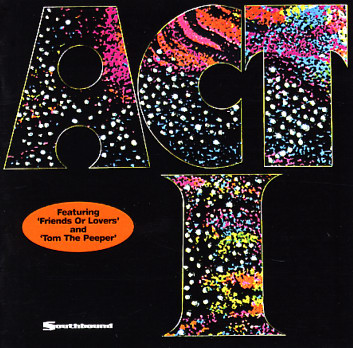 An obscure soul group, but a great one – equally at home with a fragile harmony tune as they were with more uptempo groovers for the dancefloor! This one and only album from Act One is a perfect illustration of the best two sides of the east coast indie soul scene of the early 70s – because some tunes are spare, simple, and heartbreaking – really building off the best qualities of 60s harmony soul, but with a lot more sophistication – while others are bolder, more upbeat, and positive – really using the new studio modes of the time to send a few tunes really over the top! The mix is quite similar to Black Ivory at their best – although the album's more under-discovered treasure – and although it's the only record ever by the group, it's got a solidity that should have made them as big as any of the 70s stars on Atlantic or Philly International! Titles include "Goodbye Love", "Friends Or Lovers", "Tom the Peeper", "Party Hardy People", "I Don't Want To Know What You Do To Me", "Still Waters", "It's The Same Old Story", and "Love's Got Your Mind".  © 1996-2021, Dusty Groove, Inc.
(Original pressing.)

Drowning In the Sea Of Love
Spring, 1972. Near Mint-
LP...$9.99
A big one for Joe – and a marked shift after his southern soul recordings of earlier years. For this one, Joe got on the Philly train early, and hired Gamble & Huff to put the whole thing together with a tight smooth soul groove. The group's got greats like Norman Harris, Vince Montana, ... LP, Vinyl record album