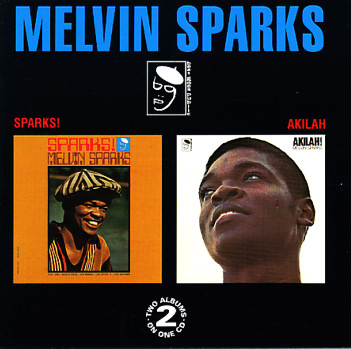 2 great ones from funky guitarist Melvin Sparks – back to back on a single CD! The Sparks album is a killer – one of the best from Prestige during the runaway classic years of the early 70s! Melvin Sparks is a genius guitarist, with a talent as rich as that of Grant Green, who's probably his most immediate precursor. He'd played in the groups of Lou Donaldson and Jack McDuff during the late 60s, but by the time of this release, he was breaking out on his own as one of the hottest funk guitarists in jazz. The group's an excellent one – and features Idris Muhammad on funky drums, Virgil Jones on trumpet, and the great Leon Spencer on organ. The tracks are nice and long, especially the original "The Stinker", and the cool cover of "Spill the Wine". Also includes a great funky cover of Sly Stone's "Thank You Falletinme Be Mice Elf". Akilah is an album that was cut for Prestige during the years when they were expanding the lineup on the albums a bit past the usual soul jazz quintet format – but even with a bigger group, the album's still got a great array of players, including Leon Spencer on organ, Idris Muhammad on drums, Virgil Jones on trumpet, Dave Hubbard on tenor, Hubert Laws on flute, and Sonny Fortune on alto. Melvin's single-line guitar work is incredibly great – very much like Grant Green's during the early 70s – and titles include "Love the Life You Live", "Akilah", and "All Wrapped Up".  © 1996-2021, Dusty Groove, Inc.
(Out of print.)

This Is It
Savant, 2005. Used
CD...$8.99
Melvin Sparks on guitar, Jennifer Hartswick on trumpet, Cochemea Gastelum on saxophone, Jerry Z on hammond organ, and Justin Tomsovic on drums. CD