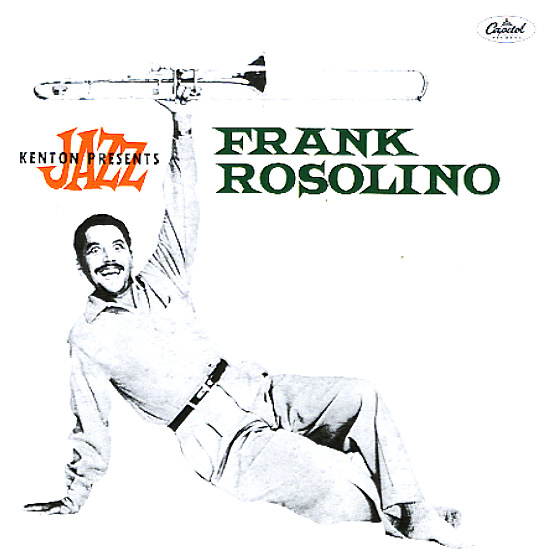 One of the first albums ever cut as a leader by trombonist Frank Rosolino – a hip set issued under the Stan Kenton Presents banner for Capitol in the mid 50s – but done in a smaller combo mode than you'd hear with Stan! The setting provides a great showcase for the emerging solo talents of Rosolino on trombone – a player with a soulful swing that get way past his goofy image on the cover – and which is set up here in the company of some great collaborators who include Charlie Mariano on alto sax – playing so strongly, the album might well include him as a co-leader – plus piano from either Claude Williamson or Pete Jolly, trumpet from Sam Noto, bass from Max Bennett or Curtis Counce, and drums from Mel Lewis or Stan Levey. There's not only a lot of Kenton influence in the players, but a lot of Bethlehem Records styles as well – a reference that definitely shapes the sound of this set, and makes it a strong one for any fan of 50s work on that label – or Mode Records as well. Titles are a mix of standards and originals – and include "Ragamuffin", "Linda", "Carioca", "Besame Mucho", "Yo Yo", and "Freckles".  © 1996-2022, Dusty Groove, Inc.
(Mono teal label Capitol pressing. Cover has some surface wear and aging, a small sticker on back and a center split in the bottom seam.)

Thinking About You
Sackville, 1976. Near Mint-
LP...$3.99 5.99
Some of the last work ever recorded by trombonist Frank Rosolino – really wonderful laidback live material that has Frank blowing in an open, spacious sort of way! The album's a great chance to hear the creativity and soul of Rosolino's trombone at its best – and has a very different ... LP, Vinyl record album