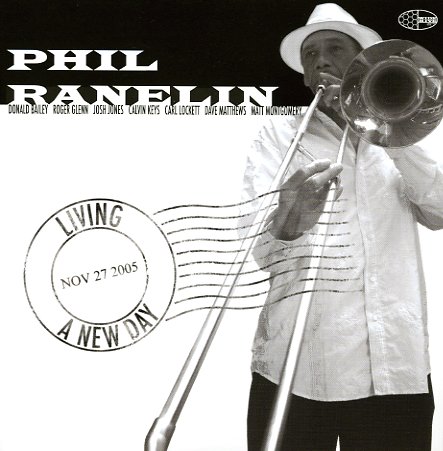 Living In A New Day

Warmly spiritual work from trombonist Phil Ranelin – an album that shows he hasn't missed a beat since his legendary years as part of the 70s Tribe Records scene in Detroit! The record's the first we've heard from Phil in a number of years, and the first since a near-fatal accident that almost took his life (hence the title) – but it's a session that's definitely worth the wait, as Ranelin's got a sound and soulfulness here that's totally great – a really put-together approach to his music that comes through on the very first tune! The players here include some nice surprises – such as vibist Roger Glenn, an overlooked genius from the 70s who shows up on one track – and labelmate Calvin Keys, whose guitar lines are always a great addition to any set. Other musicians include Donald Bailey on drums, Dave Matthews on piano and organ, and Matt Montgomery on bass – and titles include "Livin In A New Day", "Metamorphosis", "Naptown After Noon", "Blue Bossa", "Escapology Maximus", and "Another Kind Of Time & Place". CD also features 2 bonus alternate takes too!  © 1996-2022, Dusty Groove, Inc.
(Punch through barcode.)