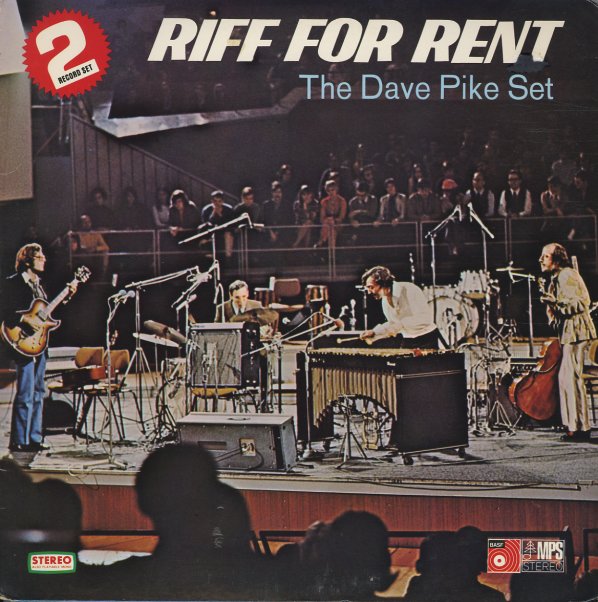 Riff For Rent (Live At The Philharmonie/Four Reasons)

Funky electric magic from the mighty Dave Pike Set – the ultra-cool combo the American vibist worked with while recording for German label MPS! First up is Live At The Philharmonie – a legendary MPS session from vibist Dave Pike – a set that mixes his funkier styles with some freer modal jazz leanings – all in a way that really makes the album stand out from the rest! The group is the groundbreaking Dave Pike Set lineup – the combo that featured Dave's vibes alongside guitar from Volker Kriegel, bass from JA Rettenbacher, and drums from Peter Baumeister – a truly funky little groove who keep things tight and interesting throughout! And although recorded live, the album's got all the spacious feel and compelling sounds of any of Pike's studio albums for MPS – and is perhaps even more amazing, given that these sounds are all spontaneous emanations from the group. Titles include "Riff For Rent", "Mambo Jack The Scoffer", "Hey Duke", "The Secret Mystery Of Hensch", and "Nobody's Afraid Of Howard Monster". Next is the even harder to find Four Reasons – funky, fantastic, and nicely tripped-out – one of the legendary MPS classics by the Dave Pike Set of the late 60s – a combo that did a great job of mixing Dave's vibes with some headier sounds and psychedelic elements! There's a warmth here that's missing from some of the other Pike dates for MPS – wonderful tones that really show Dave growing a lot as an artist, and settling into a beautiful working relationship with guitarist Volker Kriegel – who also plays some sitar and electric bass on the record too! Main bass bits, though, are handled by JA Rettenbacher – who's got this bottom sense of flow that's really wonderful – kind of a building swell that works perfectly, no matter what the flavor of the tune – and there's a mighty nice array of flavors on the set. The group's completed by drummer Peter Baumeister, who's no slouch either – and titles include "Greater Kalesh No 48", "Professer Porno's Romance", "Cornflower Girl", "The Seventh Day", and "A Nose Opener".  © 1996-2021, Dusty Groove, Inc.
(US pressing. Cover has a cutout notch, and an unglued bottom seam.)