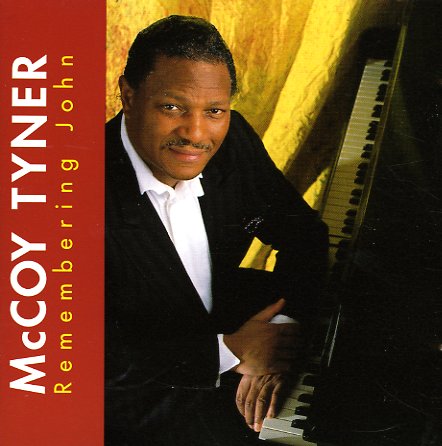 McCoy Tyner certainly should have no trouble remembering John – given that Coltrane was once his old boss – but apart from that easy reference in the title, the set has plenty more to offer – and is easily one of the most dynamic Tyner trio sessions from the later years of his career! There's a simple, focused, and direct sort of energy going on here – a soaring sensibility that's carried along by all the best modal impulses that Tyner and Coltrane explored together back in the day – but which is expressed with a different sort of warmth and soul in this trio setting. The group features Avery Sharpe on bass and Aaron Scott on drums – and titles include versions of Coltrane's "India", "Giant Steps", "One & Four", "Up Gainst The Wall", and "The Wise One" – plus "Good Morning Heartache" and "In Walked Bud".  © 1996-2021, Dusty Groove, Inc.

Double Trios
Denon (Japan), 1986. Used
CD...$11.99
Bold work from McCoy Tyner – a sweet set recorded for the Japanese Denon label in the 80s! The title's a reference to two different trios used by Tyner for the record – one with Avery Sharpe on bass and Louis Hayes on drums, plus a bit of percussion from Steve Thornton – the ... CD

Blue Bossa
LRC, 1991. Used
CD...$2.99
A budget package, but a great little record – a lively session from pianist McCoy Tyner, and one that's served up with a good deal of Latin influence in the rhythms! The sound here is easily on a par with any of Tyner's albums for bigger labels – especially Fantasy in the 70s – ... CD

Drifting
Enja (Switzerland), 1974. Used
CD...$9.99
The title's an appropriate one – as the record drifts a bit lazily from track to track. The energy never really picks up, and but it's got a nice laid back, spacious approach, settling comfortably into its destiny as a set of piano/bass duets. Titles include "Space Maker", "No ... CD

Soul Eyes
Enja/Solid (Japan), 1992. Used
CD...$9.99
Never-failing genius from Art Farmer – recording here in his later years, and working in that long and open-ended mode we love so much! There's few trumpeters who could make a record like this work – but Farmer's got a tremendous ability to stretch out on longer tunes with well-crafted ... CD

Children Of Africa
Enja/Solid (Japan), 1976. Used
CD...$18.99
Trio material – featuring Brand with Cecil McBee on bass and the great Roy Brooks on drums. The album's pretty laidback, but in a mellow spiritual mode that suits all players well. Brand plays soprano sax on the track "Ishmael", playing over his own piano lines – and other ... CD

Drifting
Enja/Solid (Japan), 1974. Used
CD...$11.99
The title's an appropriate one – as the record drifts a bit lazily from track to track. The energy never really picks up, and but it's got a nice laid back, spacious approach, settling comfortably into its destiny as a set of piano/bass duets. Titles include "Space Maker", "No ... CD