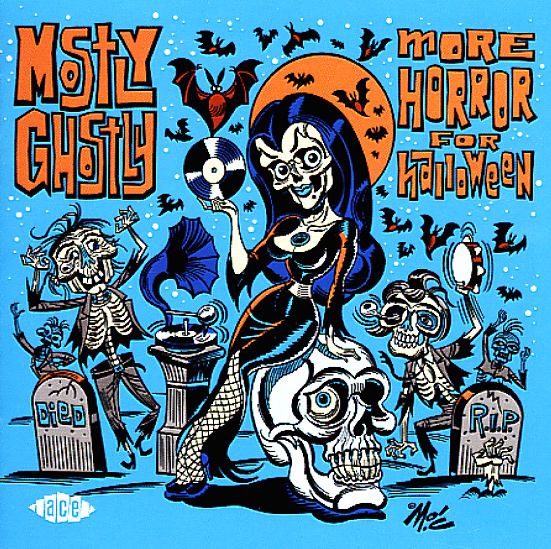 One of the hippest Halloween collections you could ever hope to buy – an amazing follow up to Ace Records' legendary These Ghoulish Things – and like that one, a treasure trove of oddball novelty numbers with a sweet October spirit! The work here goes way past familiar "Monster Mash" modes – and instead, really trawls the depths of late 50s and early 60s rock and roll – in search of weird tunes that make great use of odd production techniques, offbeat instrumentation, sound effects, and lots of horror film-inspired styles – a perfect blend of music for the Halloween holiday, and for all year long! The notes are as great as the music – and the set features 25 titles that include "Terrible Ivan" by Art Roberts, "The Cave" by Chuck Holden, "Dracula's Theme" by The Ghouls, "Do The Zombie" by The Symbols, "The Mad Scientist" by The Zanies, "They're Here" by Boots Walker, "The Goo Goo Muck" by Ronnie Cook & The Gaylads, "Spooky Movies" by Roy Clark, and "Sleepy Hollow" by The Last Word.  © 1996-2022, Dusty Groove, Inc.

Pulse Of The Early Brain – Switched On Vol 5 (mirrorboard sleeve)
Duophonic, Late 90s/Early 2000s. New Copy 2CD
CD...$15.99 16.99
Maybe the coolest entry so far in this really wonderful series – a set that's overflowing with rare and unusual work from Stereolab – most of it done at a time when the group were riding high on a major label, but still managed to issued a huge amount of music on their own, and work in ... CD