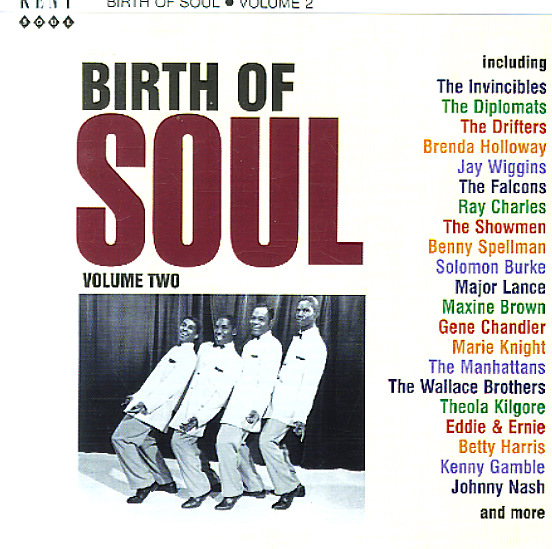 Also available
Various — Birth Of Soul Vol 2 – Seminal Early 60s Sides That Reflect Soul Music's Gospel, R&B & Vocal Group Roots ... CD 9.99
Soul music didn't just spring into the world fully-formed – and instead, the genre was the result of years of give-and-take between a variety of genres in the generation before – gospel, blues, jazz, and R&B – with maybe even a bit of influence from rock and country thrown in for good measure! And although the genre's most associated with the 60s, when it really took off, the music was still very much in a formative state at the start of the decade – a time when all the different elements, different scenes, and different artists were working in a huge variety of ways. This set brings together key tracks from the time that really helped get the soul train moving forward – a wonderful lineup of 28 titles that includes "Lipstick Traces" by Benny Spellman, "Standing In The Shadows" by Kenny Gamble, "Man's Temptation" by Gene Chandler, "I'm Counting On You" by The Freeman Brothers, "Come Tomorrow" by Marie Knight, "Heart Full Of Love" by The Invincibles, "Um, Um, Um, Um, Um, Um" by Major Lance, "Cry To Me" by Betty Harris, "I Found A Love" by The Falcons, "Always Accused" by Willie Tee, "I'll Give My Life" by Brenda Holloway, "Here's A Heart" by The Diplomats, "The Wrong Girl" by The Showmen, "Long Haired Daddy" by Vernell Hill, and loads more!  © 1996-2022, Dusty Groove, Inc.

One Track Mind – More Motown Guys
Kent (UK), Mid 60s. Used
CD...$11.99
Never-heard songs from the Motown empire of the 60s – all new discoveries from the label's mighty deep vaults – all of them totally great tracks that make for a superb new look at the Detroit powerhouse of soul! Many of these cuts are in a Northern Soul mode – the kind of upbeat ... CD