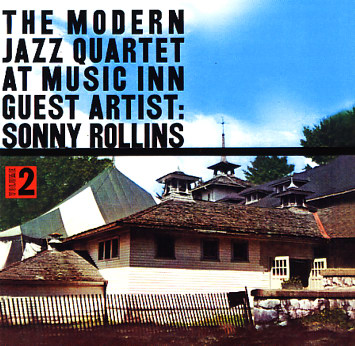 The Modern Jazz Quartet with a very noteworthy addition – the great Sonny Rollins, whose work on this record really makes it a cut above the usual MJQ outing for Atlantic! As on the quartet's previous Music Inn album with Jimmy Giuffre, the addition of a reed player really inflects their trademark sound with a new range of sounds and feelings – and Rollins himself cuts back on the hardbop influences, and shows some great restraint in matching some of the group's more modern modes. Sonny only plays on 2 of the album's 6 tracks – but that's enough to open it up nicely – and on other numbers, the MJQ begin in their usual mellower mode, but then seem to step things up with more boppish inflections, almost anticipating Rollins' arrival on the last 2 numbers. Sonny plays on the tunes "Bag's Groove" and "Night In Tunisia" – and other titles include "Midsommer", "Festival Sketch", "Yardbird Suite", and an opening medley.  © 1996-2022, Dusty Groove, Inc.
(1998 Atlantic Original Sound digipack pressing.)