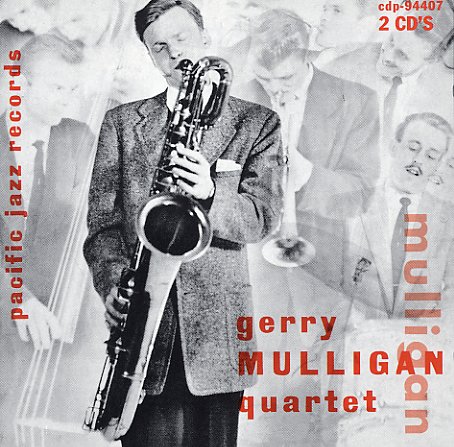 A massive 2CD set that collects together 42 early recordings by the legendary Gerry Mulligan Quartet with Chet Baker – the complete work of that group for Pacific Jazz, apart from their pairing with Lee Konitz! The set is really overflowing with work, and includes both 10" and 12" LP takes of some tunes, plus a few other alternates, and all of the original material that was spread out over a number of hard-to-track down 10" LPs. Both Mulligan and Baker recorded together a number of times after this, in a "reunion" style that hearkened back to the fame of these sides – but the originals are still the best, and feature a magical pairing of two gentle jazz talents in a setting that's mostly piano-less – but which also features some occasional work from Jimmy Rowles, plus a bit of ivory from Gerry as well. Titles include "She Didn't Say Yes She Didn't Say No", "Bernie's Tune", "Soft Shoe", "Walkin Shoes", "Motel", "Cherry", "Love Me Or Leave Me", "Swinghouse", "Five Brothers", "Tea For Two", and "Funhouse".  © 1996-2022, Dusty Groove, Inc.
(Out of print.)

Keep The Customer Satified
Pacific Jazz, 1970. Used
CD...$7.99
Buddy certainly knew how to keep the customer satisfied – as you'll hear on this hip set of big band grooves, recorded by Buddy for Liberty Records in 1970, and issued here with a number of extra bonus cuts. The set's got Buddy working with a tight group of younger players, in a mode that's ... CD