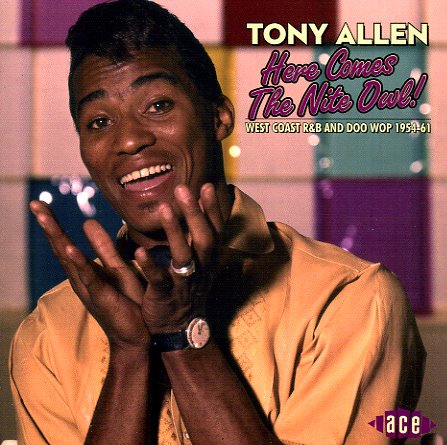 West coast r&b, doo wop and all around fantastic numbers from the mid 50s to the dawn of the 60s – fantastic stuff from Tony Allen – not the Afrobeat legend, but the unjustly overlooked singer! Tony had a bunch of excellent singles on the important r&b labels of the day, but never really hit a stride that carried him into the mainstream. It's as good as the better known r&b and proto rock of the day, and this CD is a wonderful introduction to a singer we haven't been well enough acquainted with! Includes tunes cut for labels such as Specialty, Ebb, Crown, Modern, Kent & Ultra – rollicking solo numbers and others with group backing by the Chimes, The Champs, The Night Owls and The Wanders. 26 tracks in all with several previously unissued! Includes "Check Yourself Baby", "Nite Owl", "Especially", "I", "Come Back", "Lovers Mountain", "If I Had Aladdin's Lamp", "Give Me A Chance", "Don't You Know I Love You", "I Found An Angel", "It Hurts Me So", "Check Yourself", "Be My Love, Be My Love" and more.  © 1996-2023, Dusty Groove, Inc.