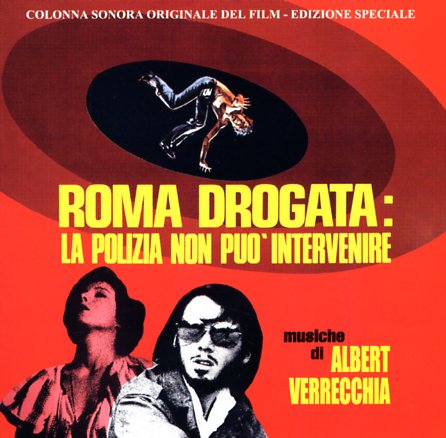 Freaked-out fuzzy work from the Italian soundtrack scene of the 70s – all with a sound that's quite appropriate for a film that was also known as Hallucination Strip! There's a lot more guitar in here than you'll hear on other Italian 70s scores – often used in fuzzy, psychedelic ways with a definite rock influences – but also laying out in more spare, open-ended styles too – almost spacey at points, with some really weird sounds mixed in alongside keyboards and percussion! The music has some touches of darkness, but not really any of the atonality of some of the horror work of the generation – and even though many tracks are short, they pack in plenty of punch, and plenty of fresh ideas too. CD features 19 titles in all – 2 with vocals by Edda Dell'Orso, 2 with vocals by Sammy Barbot.  © 1996-2020, Dusty Groove, Inc.
(Still sealed.)

Music From Mickey Spillane's Mike Hammer
RCA (Spain), 1959. Used
CD...$18.99
Wonderful TV soundtrack work from Skip Martin – who's really giving Henry Mancini a run for his money in the crime jazz department! Martin's score for the Mike Hammer show here is totally great – penned with a range of styles that run from swinging to sentimental – all handled by ... CD

La Carica Delle Patate (with bonus tracks)
Beat (Italy), 1979. Used
CD...$11.99
One of the lighter soundtracks we've ever heard from Francesco De Masi – scored for an equally lighthearted film about a bunch of kids off on adventure – all given a nice soundtrack that's both playful and lively, but without ever sounding too sentimental! The style here is more late ... CD

Mad Doctor Of Blood Island
Elysee Productions, 1969. Used
CD...$14.99
The CD debut of this late 60s horror soundtrack – a real gem that's presented with a fair bit of exotic touches in the music! Weird vocals, percussion, odd horn parts, and other spooky bits really keep things interesting amidst the fuller orchestrations – and in a way, the score ... CD