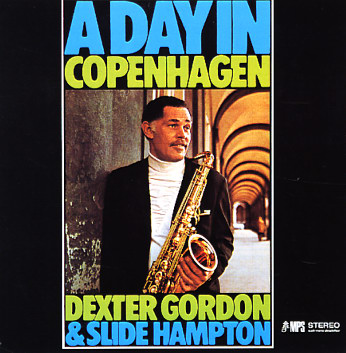 A tremendous European meeting of tenorist Dexter Gordon and trombonist Slide Hampton – brought together in this impeccable sextet session for MPS – a real standout in the label's straight jazz catalog over the years! By the time of the set, Gordon had been working heavily in Europe, especially Copenhagen – a locale where he was given ample freedom to stretch out and really explore his tone and phrasing. Hampton had also kicked around the continent a fair bit too, but in a tighter format, doing arrangements for others and working in bigger groups – and it's actually his careful touch that really helps shape the sound of the set – by bringing Gordon's groove into a focus more strongly than before, and reminding us that Dex was a great group player when he wanted to be! The frontline features Gordon's tenor, Hampton's trombone, and the trumpet of Dizzy Reece – often stating the heads in a fluidly soulful way, then breaking out nicely with individual voices – very much in the best Blue Note mode. Rhythm is by the trio of Kenny Drew on piano, Art Taylor on drums, and Niels Henning Orsted Pedersen on bass – and titles include 3 excellent originals by Hampton – "A New Thing", "My Blues", and "A Day In Vienna" – plus a wicked almost-Lee Morgan-esque take on "What's New", and versions of "Shadow Of Your Smile" and "You Don't Know What Love Is".  © 1996-2022, Dusty Groove, Inc.
(80s PAUSA pressing in a non-gatefold cover, with light wear.)

In Tune
MPS, 1971. Near Mint-
LP...$9.99
One of the first albums cut by the fab Singers Unlimited – and the set that has them backed by the Oscar Peterson Trio! The Singers always mixed well with guest jazz talents – and the style of this albums gives their sweet harmonies a nice jazz-based groove and not too much cheese on ... LP, Vinyl record album

500 Miles High
MPS, 1977. Near Mint-
LP...$13.99
A groovy overseas date from George Shearing – one of those special 70s sessions on MPS, which always seem to sparkle than his work on other labels! The group includes Louis Stewart on guitar and Niels Henning Orsted Pederson on bass – on titles that include "Old Folks", " ... LP, Vinyl record album

Way We Are (US pressing)
MPS, 1974. Near Mint-
LP...$6.99
Funky and Latiny! Although we don't normally dig records by George Shearing, this cool 1974 session for MPS is a nice groover with a good 70's sound that adds a lot of tight rhythm to Shearing's often-sleepy playing – coming up with a whole new sound that has some really wonderful moments! ... LP, Vinyl record album