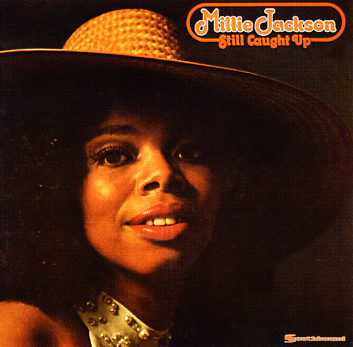 Still Caught Up (with bonus tracks)

Also available
Millie Jackson — Still Caught Up ... LP 7.99
A great follow up to Mille Jackson's classic Caught Up album – but one that's also a key turning point too! The theme here is the same as the album before – with tunes that have a woman "caught up" in love and all of its tangles – but the sound is also bolder, more positive, and somehow more righteous than before – with Millie stepping from the weepy shadows very firmly into the mainstream – making a bold move forward for women in general in the process! Production is still by southern soul whiz Brad Shapiro – but he's also brightened things a bit too, in keeping with Millie's bolder spirit – shaking off some of the earthier tones of the music, and hipping things up slightly with some more modern instrumentation. Millie's vocals are completely wonderful throughout – rasping with that badass style that would later explode even more strongly – and there's lots of spoken bits that make the tunes sound even more personal – as if you're listening at the door, or tapping the phone while Millie's talking to her man! Titles include "Loving Arms", "Do What Makes You Satisfied", "Making The Best Of A Bad Situation", "The Memory Of A Wife", "Leftovers", and "Tell Her It's Over". Expanded CD features 2 bonus tracks – "The Memory Of A Wife (rehearsal version)" and "How Can I Make Sweet Love To You If You Won't Stand Still", which is an earlier version of "One Night Stand".  © 1996-2022, Dusty Groove, Inc.

Moods Of Millie Jackson – Her Best Ballads
Spring/Kent (UK), Mid 70s. New Copy
CD...$9.99 18.99
A side of Millie Jackson that we really really love – her ballads and mellow tracks – a style that Millie did unlike anyone else back in the day! Jackson's sometimes best remembered for her sassier side, but we love it when she kicks back and moves slowly into a groove – drawing ... CD