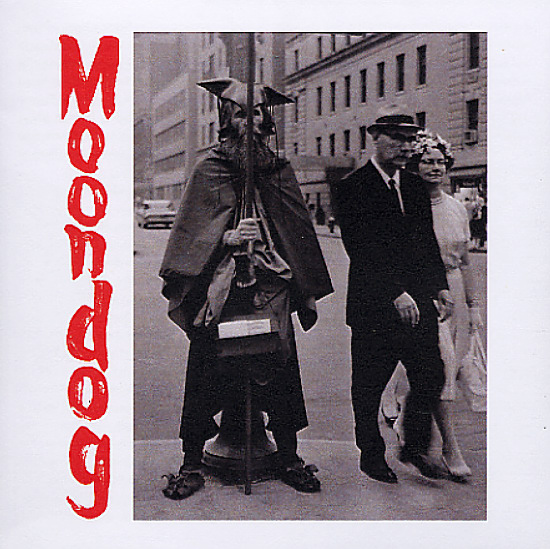 Moondog – The Viking Of Sixth Avenue

A long-overdue tribute to the legendary Moondog – one of the true visionaries of American music in the 20th Century! Moondog got his starts as a blind musician working the streets of New York at the end of the 40s, but he did so (as you'll note on the cover photo) with a range of unusual instruments of his own invention, and in a minimal, rhythmic style that linked together primitivism with higher musical ideals. Moondog's often been called "the father of minimalism" – and while his experiments of the 50s prefaced the work of Steve Reich, Terry Riley, and others, his work was also much more personal, and had an earthy intensity that's still tremendously powerful even decades later! This collection is one of the first to dip into the earliest of Moondog's recordings – his recordings for the Mars, SRC, Brunswick, and Moondog labels – which are presented here alongside selected tracks from his albums for Epic and Prestige, also of similar vintage. Nearly all the tracks here offer a very primitive blend of percussion that's sometimes mixed with unusual woodwind or stringed instruments – nearly all of Moondog's own invention – and the package also features some great notes on his long career, plus some photos that are as gripping as the music itself! Titles include "Down Is Up", "Big Cat", "Bumbo", "Rimshot", "Rabbit Hop", "Instrumental Round", "Be A Hobo", "Dog Trot", "Oasis", "2 W 46th Street", and "Why Spend The Dark Night With You".  © 1996-2021, Dusty Groove, Inc.

Wize Music
Finders Keepers (UK), Late 70s/Early 80s. New Copy
LP...$14.99 26.99
Denis Wise plays all instruments on this record – everything but the kitchen sink! Oh wait – the liner notes actually indicate that he does play a kitchen sink – and a garbage disposal too – but in ways that are completely changed, as he mixes them with sounds from a ... LP, Vinyl record album

Karel Goeyvaerts
Cacophonic (UK), 1973/1977. New Copy
LP...$14.99 26.99 (CD...$6.99)
Beautiful sounds from Karel Goeyvaeters – a Dutch minimalist with a really wonderful sense of tone! The album features two long pieces, both from the mid 70s – each using a variety of sounds in cyclical fashion – in ways that recall some of the best Terry Riley material of the ... LP, Vinyl record album