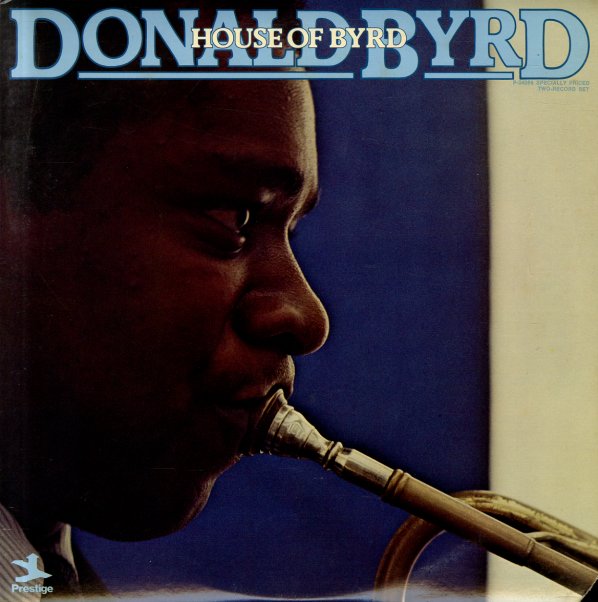 Two nice Prestige blowing sessions from the 50s – featuring Donald Byrd right up front. The first LP of the set was issued as Two Trumpets with Art Farmer joining Byrd, set in a sextet with Jackie McLean, Doug Watkins, Barry Harris, and Art Taylor. The harder sound of Byrd is a nice mix with the lyricism of Farmer, and the open-ended nature of the set lets them get a bit more open in their solos than usual. 5 numbers are included: "Contour", "Round Midnight", "The Third", "When Your Lover Has Gone" and "Dig". The second set was issued as The Young Bloods, with Byrd accompanied by sidemen he's not often heard with, Phil Woods, Al Haig, Teddy Kotick and Charlie Persip. Like the first side, it's a rousing set of bop, played with a great deal of fire. 6 numbers make up that set, including "Dewey Square", "Dupeltook", "Once Moore", "House Of Chain", "In Walked George" and "Lover Man".  © 1996-2022, Dusty Groove, Inc.
(Cover has some ring and edge wear.)

Black Byrd
Blue Note, 1973. Near Mint-
LP...$44.99
A landmark album – Donald Byrd's first session with producer Larry Mizell, the man who went on to forever change the face of jazz funk! After rumbling around for a few years attempting electric styles that really didn't fit his mode, Donald wisely hooked up with Larry, and hit a groove here ... LP, Vinyl record album

Places & Spaces
Blue Note, 1975. Very Good-
LP...$39.99
An incredible record that was one of the highest points of Donald Byrd's career! The album's the third one he cut with producer/arranger Larry Mizell – and of all Byrd's work with Mizell, this one's the funkiest, the tightest, the most soulful, and the most perfectly realized vision of the ... LP, Vinyl record album

Eric Dolphy At The Five Spot Vol 1
Prestige, 1961. Very Good+
LP...$499.99
Searing live work from Eric Dolphy – part of a series of recordings that set a whole new standard for live jazz recording! The record features Dolphy going even farther out than on his studio sides from the time – as the record features very long tracks performed by a crack group that ... LP, Vinyl record album