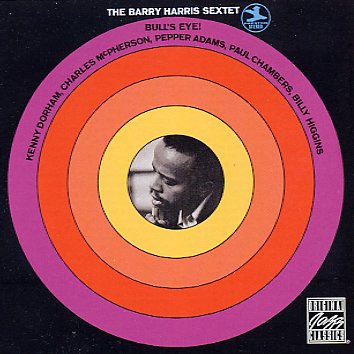 A sock-hard set of Detroit soul jazz that's one of Barry Harris' best albums of the 60s! The group on the record is a sextet – with Kenny Dorham on trumpet, Charles McPherson on tenor, and Pepper Adams on baritone – forging a much harder frontline than you'll hear on some of Barry's more lyrical albums from the same time – a new sort of groove that really locks Harris in nicely to the Prestige soul jazz sound of the 60s. The group works well together on arrangements by Harris – swinging hard and lively, sometimes with a vamping energy that's almost modal – and which really lets McPherson hit some especially nice lines on tenor. Rhythm is from Paul Chambers and Billy Higgins – and the horns sit out for 2 of the album's 6 tracks. Titles include "Oh So Basal", "Off Monk", "Barengo", "Bull's Eye", and "Clockwise".  © 1996-2021, Dusty Groove, Inc.
(Green label pressing. Cover has light wear in one bottom corner, but is great overall.)