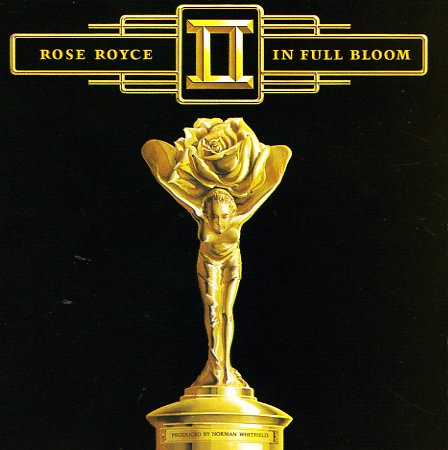 A big one for Norman Whitfield – who found in Rose Royce what he'd been lacking for years – a hit group ready to handle a number of styles, all well, and all with an adventurous style that would break them past the legions of lackluster funky soul groups of the late 70s. The record blends the band's more famous funky styles with smoother jazzy soul that's almost in a Minnie Riperton mode – and which is made even more so by the sweet lead vocals of Rose Norwalt. She's heard to best effect on the cuts "Wishing On A Star" and "Ooh Boy" – and other funkier numbers include "Do Your Dance", "Funk Factory", and "It Makes You Feel Like Dancing", which are all filled with great keyboards and nice spacey grooves.  © 1996-2021, Dusty Groove, Inc.

Music Web
Whitfield, 1978. Very Good+
LP...$7.99
A fantastic revival in sound for Spyder Turner – a Detroit singer who cut some material for MGM earlier in his career, but never at a level that fully took advantage of his range! This time around, he's back in action in the late 70s, and working with producer Norman Whitfield – who ... LP, Vinyl record album

Working On You
Columbia, 1981. Very Good+
LP...$14.99
A sweet mellow groover from the mighty Lamont Dozier – a set that's not nearly as well known as his earlier work of the 70s, but one that has the Motown man still riding strong! In contrast to the fuller, clubbier grooves of Dozier's ABC work, most of the tunes here are a bit more laidback ... LP, Vinyl record album

Sarah Dash
Kirshner, 1978. Very Good+
LP...$4.99
Sarah Dash's first album as a solo act – after important early work in Labelle – and a pretty classy set of club tunes that benefits heavily from arrangements by Leon Pendarvis! Pendarvis gives the record the full and flowing feel of his best work from the time – disco, to be ... LP, Vinyl record album

Lisa Lisa & Cult Jam With Full Force
Columbia, 1985. Very Good+
LP...$11.99
An 80s pop soul classic from Lisa Lisa & Cult Jam With Full Force – insistent and irresistible to this day – and a solid album full of tunes that stand up strongly with their unstoppable hit singles of the period! Yes, the sound would get a bit too cutesy and played out by the end ... LP, Vinyl record album

ABC
Motown, 1970. Near Mint-
LP...$49.99
A seminal step forward for this legendary group – easily one of the greatest albums they ever cut! With ABC, the Jacksons are expanding their sound with the club-oriented grooves of the time – using Holland, Dozier, and Holland on many cuts, trying for a similar soaring groove as some ... LP, Vinyl record album

Ella Washington
Sound Stage 7, 1969. Very Good
LP...$69.99 (CD...$6.99)
A rare set of deep deep deep soul vocals by one of the best singers on the Sound Stage 7 label – Ella Washington's self-titled gem from 1969! Ella's vocals are as great as those of the soul superstar divas of the day, and she's backed by a beautifully tight band – in a style that ... LP, Vinyl record album

Promise Of Love
State, 1977. Near Mint-
LP...$24.99
The classic first album from Delegation – a great male soul trio from the late 70s, and one who sound great on both sweet mellow tunes and more upbeat ones! Delegation have a sound that's quite unique, especially on this album – a groove with slightly tropical traces on some numbers, ... LP, Vinyl record album

Rufusized
ABC, 1974. Near Mint- Gatefold
LP...$19.99 (CD...$8.99)
Funk, soul, jazz, and plenty more – all wrapped up into this 70s masterpiece from Rufus – the kind of record that not only never gets old, but which still has folks wondering how the group could have gotten things this perfect all these many years later! Chaka Khan and the group are in ... LP, Vinyl record album