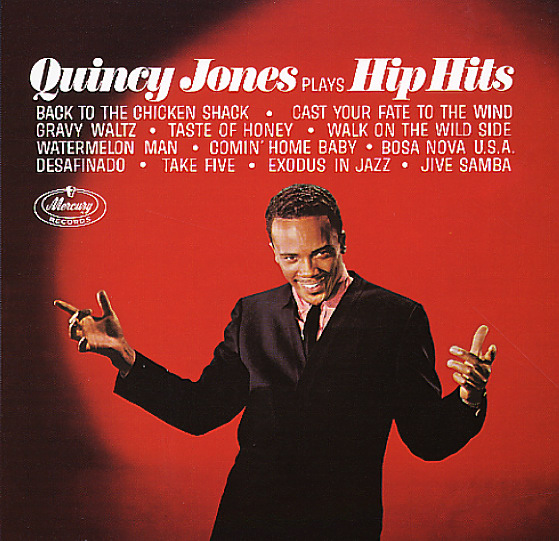 One of Quincy Jones' best for Mercury Records in the 60s – a very groovy record that was done with a feel that's somewhere in between his Big Band Bossa album and his best 60s soundtrack work! The format is simple – Quincy picks a sweet batch of jazz semi-hits from the early 60s, plays them with a nice mix of soul jazz arrangements, and works with a great ensemble filled with wonderful players – including Roland Kirk, Budd Johnson, Seldon Powell, James Moody, and Jerome Richardson on reeds; Lalo Schifrin and Patti Brown on piano, Jim Hall on guitar, Clark Terry on trumpet, and Melba Liston on trombone – plus lots of great percussion at the bottom, helping bring some Latin energy to the grooves at points. Tunes are familiar, but all given a great Quincy Jones twist – and titles include "Gravy Waltz", "Jive Samba", "Walk On The Wild Side", "Bossa Nova USA", and "Watermelon Man".  © 1996-2022, Dusty Groove, Inc.
(Mono black label pressing with deep groove. Cover is bent a bit at the top left corner.)

Gula Matari
A&M, 1970. Very Good+ Gatefold
LP...$14.99
A real step forward for Quincy Jones – a record that really shows the jazzman moving into sophisticated new territory – a sound that's just right for the CTI generation! The album's got a vibe that's a bit similar to Quincy's Walking In Space album, but it's a lot deeper too – ... LP, Vinyl record album