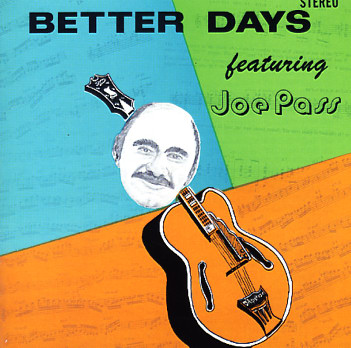 Quite possibly the funkiest record ever made by guitarist Joe Pass – a real surprise from an artist we mostly know for his mellower and straight ahead work! The style here is tight electric funk, almost in a Groove Merchant sort of way – and given Joe's heavy use of hollow-body guitar on the record, and the warm chromatic hues in his tone, the style's a fair bit like O'Donel Levy on his 70s classics from the same era. Bassist Carol Kaye had a hand in putting together the record, and there's a similar feel here to her own best grooves – tight, studio-oriented work – but never slick or too commercial! Other players include Joe Sample on keyboards, Paul Humphrey on drums, Tom Scott on sax and flute, and JJ Johnson on trombone – and despite the presence of these heavyweights, the record has a nicely soulful sound that's more indie grit than major label funk! CD adds some bonus tracks to the original record – and features 18 titles that include "Free Sample", "Better Days", "Head Start", "It's Too Late", "Gotcha", "Alison", "The Preacher", "Bass Blues", "Burning Spear", "Slick Cat", "Flying Down To Baja", and "Love Is".  © 1996-2023, Dusty Groove, Inc.
(Japanese pressing – with obi!)