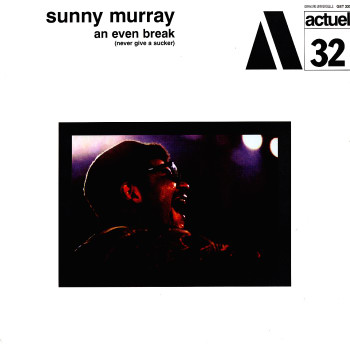 Even Break (Never Give A Sucker)

One of the best-ever BYG/Actuel sessions, and one that has the unlikely pairing of east coast avant players Sonny Murray and Byard Lancaster with Art Ensemble bassist Malachi Favors. Murray plays drums, and reads a bit of poetry, while the band wails behind him in powerful turgid lines of hard free jazz. 4 long tracks – "Invisible Blues", "Complete Affection", "Giblets – Part 12", and "An Even Break".  © 1996-2021, Dusty Groove, Inc.
(Original pressing. Vinyl has a very small press flaw spot that clicks just a bit on "Complete Affection". Cover has unglued seams, light surface wear, and some aging.)