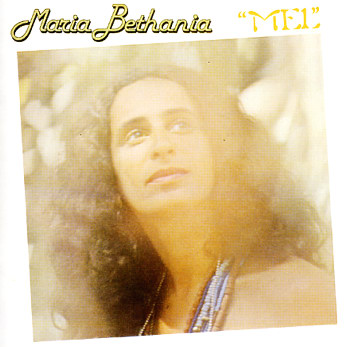 A gentler, more laidback album that some of Maria Bethania's more dramatic efforts from the early 70s – but still a pretty great little record, served up with a sense of poise and power that few of her contemporaries could match! Backings are arranged by Perinho Albuquerque, in a way that's often relatively spare, but still full at the bottom – letting the vocals take most of the top of the sound, in a way that makes for a nicely personal quality to the record. Tracks include numbers written by Joyce, Caetano Veloso, and Luiz Gonzaga Jr – with titles that include "Queda D'Agua", "Mel", "Gota De Sangue", "Da Cor Brazileira", and "Ela E Eu".  © 1996-2021, Dusty Groove, Inc.
(Includes the heavy inner sleeve. Cover has light wear and a black tarry streak on front near the opening.)

Bons Tempos, Hein?!
Philips (Brazil), 1979. Near Mint-
LP...$19.99
Good record from the late 70's by this quartet of 4 male Brazilian singers. Their sound is a different from that of Quarteto Em Cy or Tamba Trio, and their singing is less filled with straight jazzy harmonies than it is some off-kilter vocal lines that weave together and challenge each other ... LP, Vinyl record album